Looking ahead to the super stacked Classic Physique division of the 2020 Mr. Olympia, and predicting the top 10 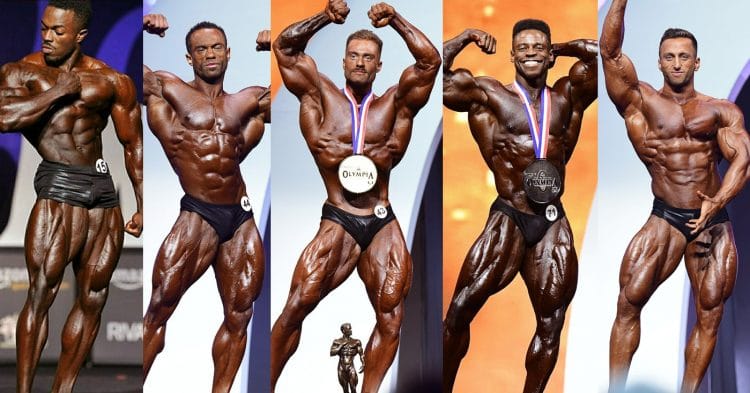 One of the most interesting aspects of the upcoming 2020 Mr. Olympia is the highly stacked Classic Physique division. This is a breakdown of what to expect from the competition, and who could end the event among the top ten.

Usually the majority of the attention at the Olympia comes from the Men’s Open Division, and this year that is certainly the case. That being said, it feels like the majority of the excitement is coming from the Classic Physique division, simply due to the number of interesting young athletes and intense rivalries. This relatively young division is fully shaping up to be a strong second best in the sport.

A total of 33 athletes have qualified for the Classic Physique Olympia this year, but Arash Rahbar has withdrawn from the contest. Even with him not attending, there is still a ton of athletes to watch that are sure to perform at a high level. With that in mind, it is tough to parse through these talented bodybuilders, but this is who we expect to make it to the top ten this year.

After taking some time to build himself, Classic Physique bodybuilder Divine Wilson came back in a big way in 2020. After coming second at the Tampa Pro, he made a quick turnaround to win the Lenda Murray Pro and punch his ticket to the Olympia. Now he will be looking to improve from the 16th place position that he earned in 2018.

There is a lot of potential in the physique of Divine, with him having some fairly large arms and a killer midsection. His legs and shoulders have yet to catch up with the rest of his awesome physique, but if he continues on his current trajectory, they will not be far behind. That being said, he is pretty likely to round out the top ten this year.

People quickly began to remember the name Deontrai Campbell after he won the Tampa Pro last July. The up and coming Classic Physique competitor looked solid in the contest, and was able to pull out the victory over some other, more experienced competitors. This led to the quick realization that he is for real.

There is a lot to like about Campbell’s calves and pecs, and they are easily his strengths. While there is a good amount of room for growth in his midsection, he is improving with each outing. Therefore he seems quite capable of scoring ninth place at his very first Olympia.

Few Classic Physique athletes have looked as impressive in this year’s Olympia prep as Wesley Vissers. The Dutch bodybuilder has not looked that impressive at the start of his career, scoring 14th at the 2019 Olympia. However, he has been showing some insane improvements over the last few months, that have proven that he is serious about being one of the best in the world.

There was a lot of hype around Vissers at the start of his career, with people calling him the future of the division. He has the natural gifts in order to potentially be just that too, with massive arms and a small waist. If his prep has been any indication, we can expect him to look better than ever this year.

Things have been looking up for Logan Franklin since he moved from Men’s Physique to Classic in 2019. He made waves by calling out current Classic Physique Olympia champ Chris Bumstead, and it got fans buzzing to see how they would look standing next to each other. There are a lot of similarities that have been noted between the two, and he has shown a lot of potential in this division.

When he won the New York Pro last September, Logan turned his heads with his strong conditioning and balanced physique. He has some of the biggest legs in the division, and they have served him well so far. This will be his first time at the Olympia in this division, and it will be interesting to see how he does, but we expect to see him make it to the seventh place position.

One of the more green athletes competing at the Classic Physique Olympia, Bryan Jones will be making his Olympia debut this year. However with his win at the Chicago Pro earlier this year, he seems to be the real deal. While this was not the most stacked event, he was able to beat some others who went on to qualify for this year’s Olympia anyway, so he has already proven himself to be at a high skill level.

It could be wishful thinking to say that Jones has the skills to land in the sixth place position at his first Olympia, but all signs point to him being a fairly skilled athlete. There is still some work to be done on his midsection, but his back double bicep, and the definition in his legs might be enough to sway the judges. Even if this is not the year for him, the future does seem rather bright for the young competitor.

Big Ruff, Terrence Ruffin turned heads when he became the youngest person at the time to win his IFBB Pro Card, in 2014. He has since developed into being one of the most skilled and interesting Classic Physique bodybuilders out there. After a second place scoring at the Arnold Classic earlier this year, he seems to be building momentum ahead of the Olympia.

Ruffin is one of those guys who is really strong when it comes to the vacuum pose. This allows him to accentuate his slender waist and wide chest. He has been showing some serious growth this year, and looks ready to be a real threat on stage.

Two-time Classic Physique Olympia veteran Dani Younan has been steadily looking better and better every time he is seen. Coming off of a seventh place score at the 2019 Olympia, he rebounded with impressive performances at the Legion Sports Fest Pro and Ultimate Warriors Pro. This has led him to this year’s Olympia, where he looks to continue showing his growth.

When he steps on stage, it is expected that Dani Younan will be bringing decent conditioning along with his enormous arms and shredded core. His delts are off the charts, and it tapers into his thin waist quite well. Provided that he continues to work on his legs, an area that has been a problem in past competitions, he should be able to get fourth place with little trouble.

After winning this year’s Arnold Classic, it became clear that Alex Cambronero was a threat to the Classic Physique Olympia title. While rather young in his career, he has a ton of experience in the Olympia, with most of it coming in the 212 Division. However he has been steadily improving in his new divisional home, and was even able to score sixth place in 2019.

Things have continued to come together for Alex, and his growth has put him in a valuable position heading into this Olympia. He has made some improvements to his legs and his arms, which has caused him a bit of trouble in the past. With this in mind, we foresee him being able to round out this top three.

There was a bit of disagreement throughout the fanbase when Breon Ansley lost the 2019 Classic Physique Olympia to Chris Bumstead. He had won the contest two years in a row, and it seemed like a new era was beginning to show itself. Despite that, he would lose to Chris by just a single point, resulting in some dissension among fans who felt that he should have deserved his third Olympia title.

The former 212 Bodybuilder is one of the biggest athletes in the division, even to the point that he has considered returning to his original division. That being said, he has clearly been focused on making improvements for this year, and reclaim his title. Unfortunately we do not think this will be enough, and expect another close decision but second place performance from the former champ.

When Chris Bumstead won the 2019 Classic Physique Olympia, he claimed it was because the judges are seeing a new direction for the division that favors his aesthetic over Breon’s. The jury is still out on that, but there does seem to be an element of truth to his statement. Either way, the beef and rivalry between he and Ansley has been one of the most interesting aspects to pay attention to, heading into this Olympia.

As much as Breon has been improving, Chris has also been doing the same thing. There are areas where each man has more to offer than the other, so expect this to be a coin toss either way. However we think that we will be seeing a defending Olympia champ at the end of this contest, with both guys pushing each other to the limit in order to wind up on top.

There is a lot to be excited about and look forward to at the 2020 Mr. Olympia, and the Classic Physique division is right up there. This division has cultivated some seriously talented bodybuilders, and it will be fun to see the whole thing develop.

Stay tuned to Fitness Volt for updates as the results develop throughout the Olympia Weekend, from December 17-20th.