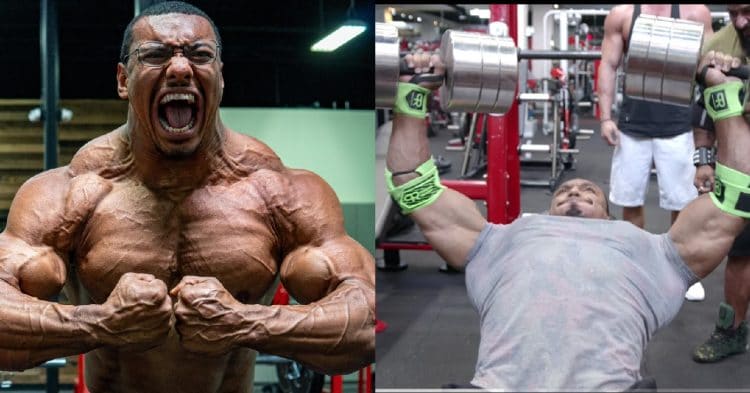 If you see Larry Wheels in the gym, the chances of him doing something crazy is almost certain. Most recently he was seen crushing yet another personal record, this time while doing incline dumbbell presses.

It seems that every time that Wheels does some training, his intention is to break a personal record. He has built his brand around this skill, and it has made him one of the most exciting and popular athletes across strength sports, as people appreciate his incredible levels of skill. No matter the lift, it seems that he is never far from reaching new benchmarks, which just leaves onlookers slack jawed in disbelief.

In fact, it seems to have gotten to the point that, in order to continue pushing his personal records, Larry Wheels has had to get some dumbbells made for him. As he explained in his recent YouTube video, the heaviest dumbbell that he could find in Dubai, where he trains, is only 70kg (154lb). Therefore he decided to commission someone to make him 100kg (220lb) weights, so that he and his team can use them in the gym. And use them he did, as he was able to take these weights and do six reps of an incline press.

It is quite the sight to behold, seeing the two men needed to hold each dumbbell, in order to carry it to Larry Wheels, who pressed them both at the same time. This set came after he did the same for four reps, but this time around he was able to crank out two additional reps. Although he explained that he had a bit of a hard time with the weight in his right arm, explaining that he has some inflammation in that hand, which led to the weight dipping.

After these crazy sets with the 100kg dumbbells, Wheels moves on to a move traditional arm and shoulder workout. This saw him doing a variety of things, from cable lateral raises to some rep work with much lighter dumbbells. He ends the session with some leg work, while explaining that this was his first time doing anything with dumbbells over 70kg in more than a year. However with a fractured pinky, he had trouble getting the weight to balance, so he expects better results in the future.

It is always crazy to see Larry Wheels accomplishing new feats of strength, and this time was no exception. As his hand heals up some more, it will be fun to see what else he can do with these new dumbbells.