Larry Wheels tries to take on arm wrestling champion Michael Todd, but fails miserably and gets made to look weak 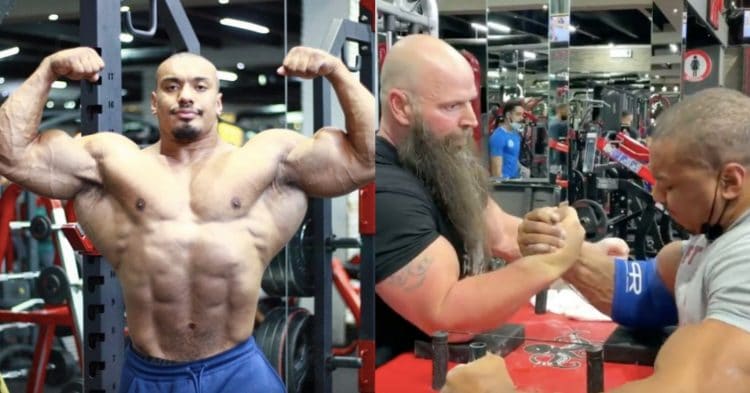 Even at his amateur level of technique, Larry Wheels has used his strength to find success as an arm wrestler. However that did nothing for him when he took on Michael Todd recently.

Over the years, Wheels has proven himself to be something of a Swiss Army Man for strength sports. No matter the activity, he has the natural athleticism to find success doing anything.

Recently the powerlifting champ had turned his attention towards arm wrestling. He has faced all kinds of foes in his road to learning this new craft, and has even taken on arm wrestling legends like Schoolboy.

However none of this success helped him when he took on World Armwrestling League Heavyweight champ Michael Todd. The Monster, as he is known, holds 20 national and 16 world titles in his illustrious career.

Nevertheless, Larry Wheels decided to test his mettle against Todd, and shared the video to his Instagram. Unfortunately things did not go his way, as Larry was barely even able to move Michael’s arm.

He would strain to move Todd just a few inches, before running out of steam. Then it was rather easy for the champ to slam Larry’s arm down and win the match.

The look of near boredom on Todd’s face while he is taking on Wheels is quite humorous to watch. Knowing the feats of strength that the PR Wrecking Machine has done, it is insane to see it not have any effect here.

That being said, Larry is still a fairly decent arm wrestler, even if things did not go his way here. He has gotten some training from several of the best in the world and has been able to apply that technique with each outing.

Here is Wheels just a few weeks earlier, with a pair of arm wrestling clips. He was able to win against Jo Linder, but came up short against Russian powerlifting champ Kirill Sarychev.

These arm wrestling endeavors of Larry Wheels are always fun and interesting to watch. Whether he wins or loses, it is a crazy visual to see him use all of his grip strength to hold on and keep fighting.

He may not be leaving powerlifting behind for an arm wrestling career any time soon, but that does not stop him from putting his all into this hobby. Not to mention the fact that he gets to work with some elite athletes in the process.

Get More From Your Workouts with Supersets: The Ultimate Guide