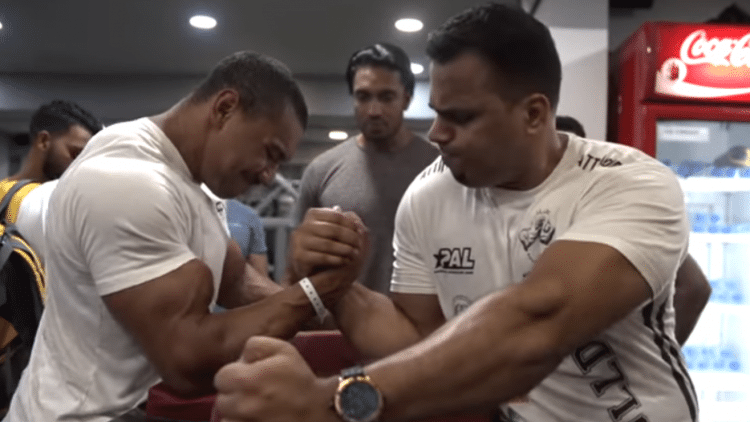 Larry Wheels is back at the arm wrestling table yet again. This time he takes on Indian champion Suhail Khan, to really test his skills.

Larry Wheels seems to be growing quite fond of arm wrestling. The powerlifting prodigy turned bodybuilder was seen earlier this month, taking on the “Korean Hulk” in an arm-wrestling match. Additionally, he had an exciting match with Hafthor Bjornsson earlier in the year.

However now, Wheels decided to take on India’s finest, Suhail Khan. Khan is an IFBB certified trainer, and powerlifter. However, he shifted his attention to arm wrestling, where he found success. Subsequently, he went on to win competitions in Dubai, and other parts of India. Surprisingly enough, Khan has won with both his left and right arms.

So Wheels, who have expressed a growing interest in arm wrestling, decided to train with Khan. He then uploaded a video of this training, which also includes the two going head to head, to his YouTube channel. Check it out.

The video starts with Wheels getting some advice on a few grips and positions to use. Moreover, Khan explains which muscle groups are important to engage while trying various techniques. Additionally, Khan showed Wheels some workouts to use but also admitted it was more the technique that Wheels lacked.

Then it was time for Wheels to face off against Khan. Unfortunately, as one might expect, he was unable to take out the Indian arm wrestling champ. In fact, as hard as he was trying, Wheels could barely move Khan’s arm. There were points where Khan even seemed amused by Wheels’ efforts. Following that, he took on various onlookers, with mixed levels of success.

Win or lose, Larry Wheels seems to be taking arm-wrestling pretty seriously. With more training, he could be very successful.