Larry Wheels Does Crazy Workout With His Couch During Indoor Training 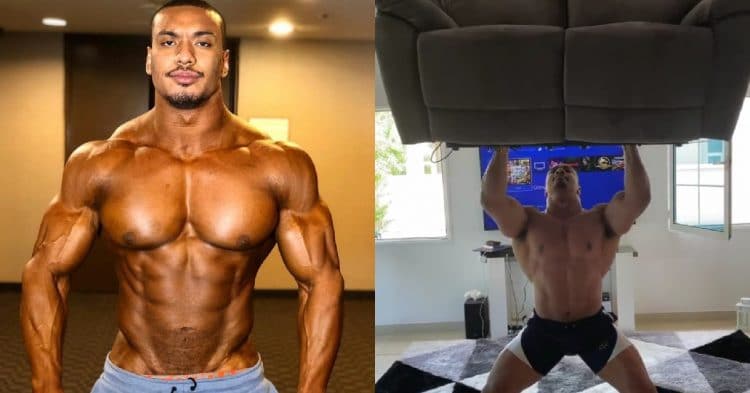 Larry Wheels is not the type of man to let a simple virus keep him from getting gains. While he is unable to go to the gym, he has decided to improvise for his workouts.

Wheels is an incredibly physically imposing force, known for his ability to constantly improve. He is always in the gym, looking to break his own personal records. Not only that, but he is often successful, earning the moniker of the personal record wrecking machine.

Now that Wheels is unable to go to the gym, and is forced indoors, he decided to try breaking another personal record. Although this one involves less barbells, instead using a couch to do some overhead presses and bicep curls. It was quite the display of strength, especially considering it would likely take two average joes to move the couch normally.

It is safe to say that the boredom is real for Larry Wheels. Luckily for him, he was able to find this alternative way to exercise. It is quite tough to stay motivated during these times, but he was able to make the best of it.

Wheels is not the only one repurposing their furniture. Classic Physique Mr. Olympia Chris Bumstead was also seen recently, doing a similar workout. He used more than just his couch though, to get more of a full body workout.

Chris Bumstead rivals Larry Wheels with his ability to use the couch effectively. However he took things up a notch, by putting stuff in a backpack, and using his broom to do curls. Not to mention, he was able to use his luggage to get some good work in too. All things considered, the two of them got in a solid workout even without the gym.

What kind of at-home exercises do you plan on doing during this trying time?