Larry Wheels and Noel Deyzel talk about injury experiences and give tips on how to prevent them. 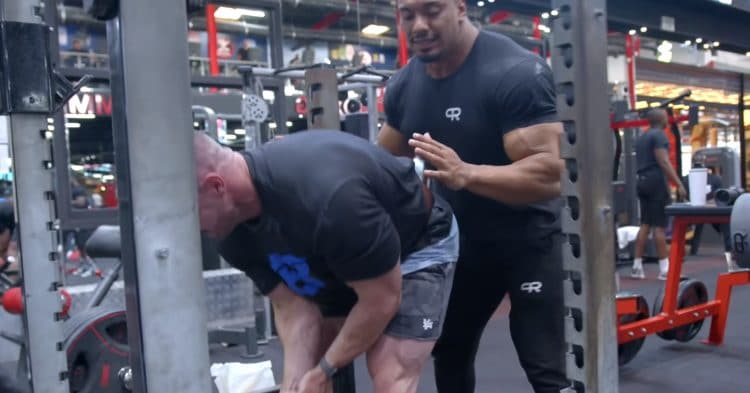 In the latest addition to his YouTube channel, Larry Wheels, a man of many skills which include bodybuilding and powerlifting, is accompanied by Noel Deyzel, a rising star in the realm of fitness and bodybuilding influencers. Larry and Noel talk about their experiences while doing a leg workout. At the start, Larry, who is famous for his supernatural strength, points out the importance of dynamic instead of static stretching, regarding strength and injury prevention.

Following up the introduction, they start their workout with front squats, which almost got really bad. While upping the weight and doing progressive overload, Noel Deyzel got to the weight that he has never lifted before. In that PR attempt, the bar slipped from his shoulder, but he dropped the weights completely and avoided a possibly serious injury, like a bicep tear.

How to come back after an injury?

Larry’s approach to injuries is to rest more than the doctor recommended. If the doctor told him to rest one month, he rests two months. Currently, Larry is in his seventh week of injury rehabilitation. Furthermore, Larry point’s out the importance of easing the training back to what it was before, and he leads by example.

“My first workout back was about a week ago. Super, super low intensity. I barely pushed 50%, now I’m like 75%.” said Larry.

When training hard and using heavy weights, the only thing you can do is to try and keep the correct form while doing exercises, but sometimes you can’t avoid it.

“You hit the nail on the head, it’s just a part of the sport. When most people start the gym, powerlifting or bodybuilding, they are very concerned about getting hurt. But the fact of the matter is that it is inevitable.”

Working out is a process, and a part of the process is getting hurt and coming back better. Larry, as every man, has learned from his mistakes and one of those is his first injury. He reflects on his first injury and his ignorance in treating it well.

“When I first got my first injury, I was very stubborn. I thought that I knew everything, I would go on the internet, google it and figured it for myself. But I ended up getting that same injury three times over in nine months.” said Larry.

Larry mentions how we shouldn’t learn it the hard way, now if something doesn’t feel right, he goes straight to the doctor and gets it checked out. To end it all, Larry gave us a quote to live by: “Making mistakes is inevitable, but you can prevent making the same mistake twice.”

Courtesy of Larry Wheels YouTube channel, you can watch the whole video here: