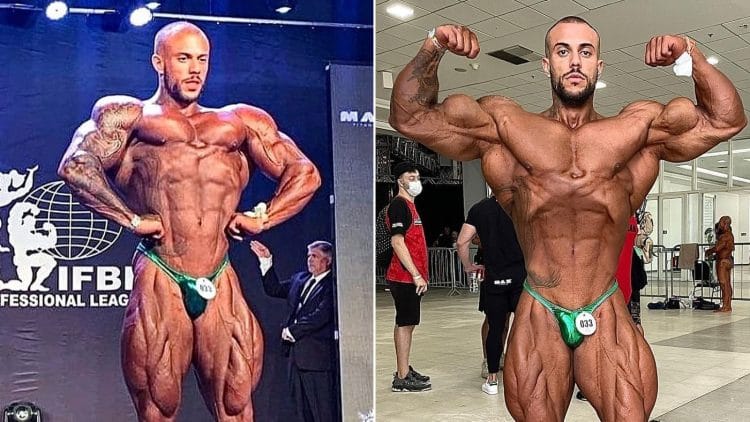 The young up-and-coming Marcello De Angelis is picking up steam in the world of bodybuilding, and many are eager to find out where he will take his physique after picking up his pro card. Following his winning performance at the 2021 Expo super show went down from 26, 27, and 28 November, curiosity shrouded the young upstart after showing off impressive V-Taper development, and some pristine vacuum poses.

De Angelis is one of Brazil’s hottest prospects in pro men’s Open bodybuilding. Given his defined build, some believe he could already be ready for competition in Classic Physique. As a former Mr. Universe champion, Panamericano champion, 2x Sulamericano champion, 4x Brasileiro overall champion, and 2x Paulista champion, it’s safe to say that Marcello De Angelis is more than ready to make a big splash as a professional.

After earning his pro card in men’s Open bodybuilding over the weekend, the photo above was taken before the show took place. Even before competing, Marcello De Angelis‘ front double bicep shot is mind-blowingly impressive. In addition, the peaks on his biceps pop nicely.

With such a defined aesthetic physique, he could possibly compete in classic physique, though, at the time of this writing, many are unsure of his weight, height, and general size. Of course, it will take some time while competing in Open men’s bodybuilding before media, pundits, and fans can begin to assess the ceiling and possible future of Brazil’s Marcello De Angelis.

As one of the most aesthetic Open pro bodybuilders on the scene, De Angelis finds himself in an exciting position. With multiple avenues of success abound, the ultra-defined De Angelis could attempt to cut the weight and go the Classic route, or just maintain this aesthetic physique in Open men’s bodybuilding. Either way, at this point it seems crystal clear that big things are ahead for the absolutely shredded Marcello De Angelis.