Lee Priest Suffers Lower Back Injury, Trying To Cope Up With Cardio Workout 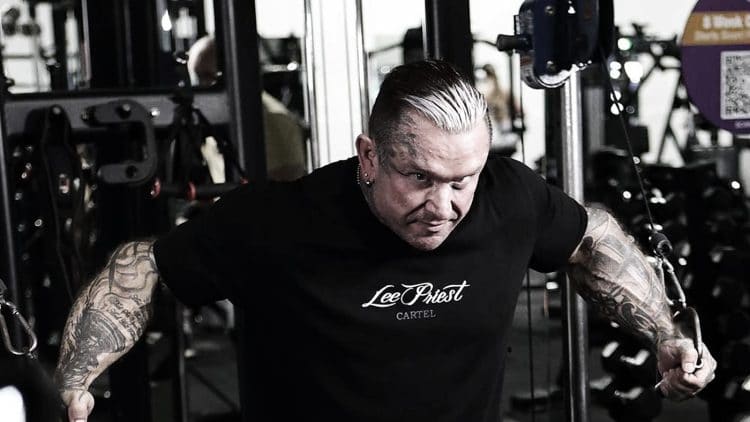 Bodybuilding legend Lee Priest recently injured his lower back. Priest shared the details of his injury and shed light on the methods he has adopted to deal with the injury in a video shared on Sam’s Fitness – Gym Equipment YouTube channel.

A perennial contender in the 1990s and 2000s era of bodybuilding, Lee Priest remained a formidable challenge for his peers on the grandest stage of bodybuilding. Winning the 2006 Iron Man Pro is one of the biggest achievement of Priest’s career. While speaking about his injury in the YouTube video, Lee Priest said:

“My back went last Friday. The Tuesday, Wednesday, Friday it felt tight and I’m like, oh, I must have done something to it and then Friday I stood up and I swear, Alec Baldwin shot me in the back!”

One of the people working for Lee Priest helped him fix the issue temporarily. However, the 49-year-old added that the discomfort resumed a day later, and had to use his grandfather’s walking stick to be able to stand upright.

“It’s almost like you hit the funny bone and you get the nauseating feeling, it’s like the nerve was that bad and I felt sick and couldn’t stand up,” Lee Priest said.

The bodybuilding legend has not been able to train the whole week due to the injury and only did occasional pad work and cycling to stay active. Priest also said that the pain he feels is not severe but rather a persistent and uncomfortable feeling. He has been using anti-inflammatory medicines and the cream to treat the back.

Lee Priest is attempting to remain active amid injury

Lee Priest stated that not working out while being injured made him feel even more uncomfortable. To ease the back pain, Priest then started doing some basic stretching exercises and cardio work to loosen up the body a little bit.

“For two days I didn’t do anything but then it’s like, well, doing nothing feels worse. Like it stiffens up even more.”

“Just getting a little concave in your back so it doesn’t roll off. I’ve just been trying to stretch it out a little bit. But, you know, some of those stretching movements are hard to get on the ground – where you bring the leg up and all that stuff,” Lee Priest said.

Lee Priest has continued to go out for a walk despite the injury. However, he is treading carefully as it has led to spasms a couple of times. The exact diagnosis of Lee Priest’s injury has not been done yet.

“I’m just going to go get a scan just to make sure there was no disc or anything out of whack. But just the thing is it only needs like that one little something touching the nerve and it’s just annoying it just takes your breath away when it hits you,” Lee Priest said.

Fitness Volt wishes a speedy recovery to Lee Priest and hopes to see him in good health soon.