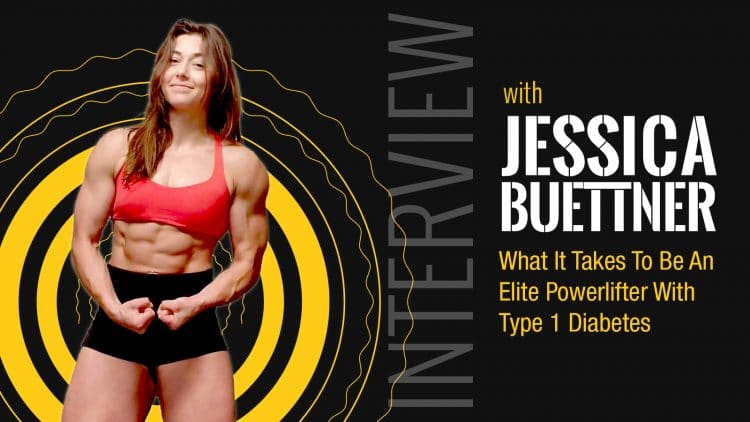 At only 25 years old, Jessica Buettner has already firmly planted herself as one of the best female powerlifters in the world. However she has already had to overcome a lot of adversity, in order to get to where she is today.

In her six year long career, Jessica has already reached some heights in the sport that others only dream of. She has had incredible performances, both in and out of competition, and continues to improve every time we see her. As a result, she has quickly developed into someone worth watching, if only to see how far she can take her skills.

However, as she explained it in an exclusive interview with FitnessVolt, Jessica Buettner was not always interested in powerlifting. In fact, she used to be highly involved with track sports, doing pole vaulting for her school. It was only when a snowboarding accident caused her to be sidelined, that Jessica began to discover a love for weights, and powerlifting.

“I used to do track and field on the University team. I was a pole vaulter, and I sprained my ankle really bad doing a dumb snowboard trick, and that pretty much ended my pole vaulting career right there. So I started lifting weights over that summer, and I just really started falling in love with it.”

However it was not an immediate decision for Buettner to try pursuing powerlifting full time. She still tried to continue her track career, but was unable to get the same results as she uses to before the injury. In fact, it was while she was still competing in track that she started competing.

“It took quite a long time. I knew that I wanted to continue (powerlifting), but I stayed on the track team for three more years after that, and track was the priority until probably 2017 or 2018.

“I’m not going to lie, I was always better at lifting weights. There was something about track and field that I always loved, but I wasn’t as good at it.”

Eventually, when Jessica Buettner began to take lifting more seriously, the positive results began piling in. As a result, it was not long before people realized that she was finding this success, while dealing with Type 1 Diabetes. While this may cause some to struggle with their diet, Jessica finds that it helps keep her disciplined.

“Having Type 1 Diabetes really helps me keep my diet in check, and it helps me stay in my weight class, when I’m paying attention to it properly. But it is really hard in terms of my sugars going up and down while training, and especially in competitions. It’s just something I always have to deal with. I always say that nothing’s impossible with Type 1 Diabetes, but it’s always going to be more difficult.”

Of course, having to deal with this forces Buettner to take special care of her diet. However she still finds ways to enjoy her food anyway.

“I try to stick a little more on the lower carbs side. I pretty much eat eggs and avocados every single day for breakfast, lots of steak and veggies. Really, really dark chocolate, too. That is a big part of my diet, for sure. Yeah, lots of stuff like that, and tons of natural peanut butter.”

As far as calories are concerned, Jessica eats around 2700-3300 calories a day during the off-season. Then, when it comes time to buckle down and prep for a meet, she will drop that down to around 2500 or less.

The one thing about her diabetes that can cause problems for Jessica’s training, is when it comes time to cut weight. She will typically stay around 173lb when she is out of competition, in order to lessen the amount of weight she has to cut to reach the 158lb weight limit for competition. However when it does come time to cut, she can struggle with her sugar levels getting too low.

“I do have it down to a system, but its a little hard with the finer points. Like if my blood sugar goes low, I’ll be forced to eat which, when you’re trying to cut, really sucks. There’s just mindless hunger when your sugar’s low. Your brain just shuts off and you’re like ‘I just want to eat everything in this fridge,’ so that’s tough.

“If your sugar gets too high on the other hand, muscle can start wasting away. So that’s more stressful in general.”

Jessica Buettner, like most of us, has put on a bit more weight than she would have liked, while being stuck indoors. However she is working on getting her weight back down, and prepare to return to a competitive schedule. As for what is next for the Canadian lifter, she has plans to compete before the end of the year.

“The next meet is going to be the IPF World Championships, if they’re on. They’re supposed to be postponed to September now, so that’s what I’m training for, in the middle of my living room,” Jessica laughed.

“(Training) started off rough at first, because I didn’t know if World’s would be on or not. Then it started getting better when I had a date set, and my coach wrote a program for me. Now I’m up at 6 or 7 in the morning, trying to deadlift, hoping my neighbors stay asleep, that sort of thing.”

Jessica continues by explaining that while she is lucky enough to have a basic home gym set-up, it is far from perfect. She does not have any dumbells or accessories, and training in a building with other residents is difficult. However it has given her the opportunity to really focus on her fundamentals, which has allowed her to still grow.

Whether it ends up being in September, or some other time, it will be exciting to see Buettner return to action. She has been able to turn in some strong performances at home, even hitting unofficial world records. As such, one can only imagine that she will be in an even better spot, once a regular training schedule is established again.