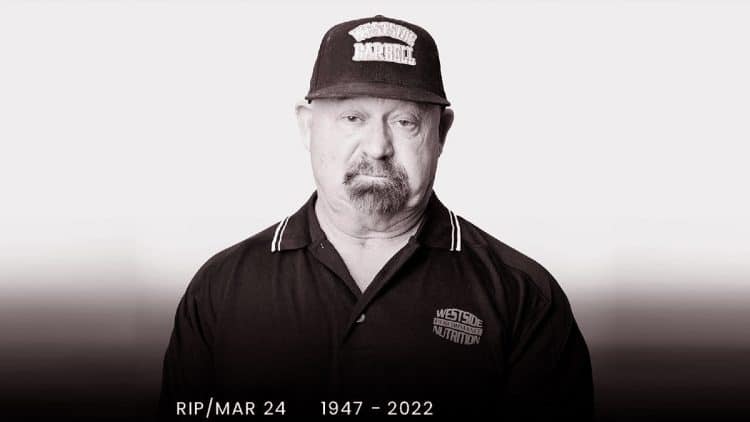 Powerlifting legend Louie Simmons has passed away. He was 74 years old. Apart from being a powerlifter, Simmons was also the founder of Westside Barbell Gym and the brain behind the conjugate training method.

Westside Barbell Gym made the announcement of Louie Simmons’ passing on their official Instagram account. They shared Dylan Thomas’s poem ‘Rage, rage against the dying of the light’ and declared Simmon’s passing in the caption to the post. They did not reveal the cause of his passing. Courtesy of Westside Barbell’s official Instagram account, you can see the post here:

“Do not go gentle into the good night. Rage, rage against the dying of the light.”

“It is with a heavy heart that we announce the passing of Louie Simmons. We will make a formal announcement after we process this loss,” Caption to the Westside Barbell’s post read.

Born on October 12th, 1947, Louie Simmons entered the world of powerlifting in the 20s and went on to become one of the most important figures in the sport.

Simmons competed professionally from 1979 to 2012. He mostly participated in the equipped powerlifting competitions. His personal best records competing in the 100kg and 110kg weight class are as follows:

Apart from being an accomplished powerlifter himself, Simmons has spent most of his time coaching some of the most elite competitions in the sport. The list includes the likes of Chuck Vogelpohl, Dave Tate, Jim Wendler and J.M. Blakely.

Louie Simmons founded the Westside Barbell Gym and invented the reverse hyper and belt Squat machines. In addition to this, he has been credited for developing the conjugate training method. It popularised the use of chains and resistance bands as the means of adding accommodating resistance to the lifts.

Louie Simmons was a respected figure in not just powerlifting but the strength sports community overall. The entire community is mourning the loss and here are some of the reactions:

“Today we lost a legend in the strength game. Louie Simmons changed the game in so many ways and his impact will last forever.

@westsidebarbellofficial #rip #louiesimmons,” Brian Shaw wrote in the caption to his post.

“The true OG. RIP❤️🙏,” Ed Coan wrote in the caption to his post.

“Rest in peace, Legend. Me and Lou had a seminar last year at Strength Beyond Fitness, and I’m forever grateful for that experience.”

“We lost a good one today…… RIP Louie. No matter what you think of Westside/Conjugate/Multi Ply/etc – if you compete in Powerlifting today, the entire sport was touched by Louie in some way. He brought the sport to the limelight and closest to mainstream as anyone. If you do singles in training, have bands in your gym, a reverse hyper, squatted in Chucks – he’s had an influence on you.

When I was lucky enough to spend a week at Westside and welcomed into Louie’s home, he was enthralled in books from physics, Samurai, engineering, etc. Not everyone may agree with his methods but I would venture to say he lived and breathed strength training knowledge more than anyone I’ve ever met. He’s been a huge positive influence on my career and likely anyone that’s graced a barbell. The Iron Gods await you Louie!!!” Blaine Sumner wrote in the caption to his post.

Sad to hear the passing of Louie Simmons the founder of Westside Barbell. A much respected strength coach having trained some of the worlds best powerlifters he was renowned for the training methods he developed, and machines he designed like the reverse hyper and belt squat.

Louie was an incredible lifter himself being one of only five lifters to reach the overall elite level in five different weight classes. He competed in powerlifting for over 50 years. By age 50, he had squatted 420kg, benched 270kg and deadlifted 327kg.

Fitness Volt wishes Louie Simmons’s family and friends all the strength to cope up with a loss of their loved one.