En route to his boxing match with Martyn Ford, Iranian Hulk AKA Sajad Gharibi crushes some heavy bags and weights in a recent video. 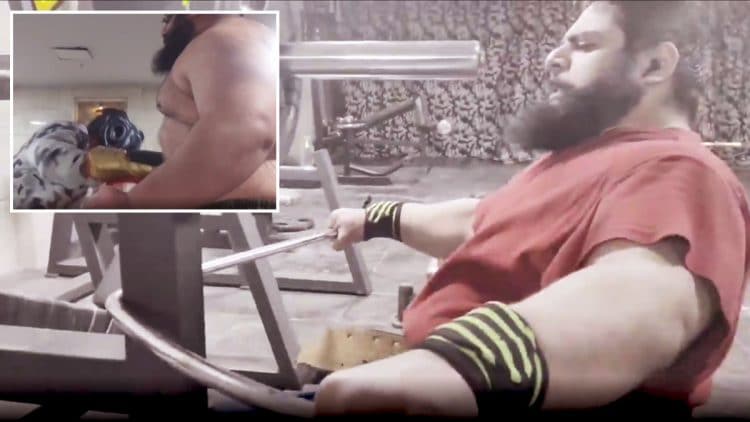 The Iranian Hulk AKA Sajad Gharibi and Martyn Ford are scheduled to meet in the boxing ring soon. Ahead of their anticipated showdown, the Iranian Hulk shared a video on Instagram demonstrating some of his intense training.

While the boxing match was slated to take place on April 2, the bout was pushed back to April 30th due to injuries plaguing the fight card. Promoting the fight with atypical training footage, Gharibi has garnered widespread attention on social media. Early in preparation, the Iranian Hulk shared a video of him punching concrete walls. Another strange video that surfaced showed Gharibi fighting a group of men off with grabs, trips and throws.

Last month, Ford and Gharibi met for the first time face-to-face and got into a scuffle. With Ford clearly having the size advantage, he shoved Gharibi to the floor at the face-off, to which the Iranian Hulk responded by rushing him with a double leg takedown. The interaction resulted in Ford defending the takedown and throwing Gharibi to the floor. Hype surrounding the fight is heating up and judging by his latest training video, so is Gharibi’s preparation.

Training Intensifies for the Iranian Hulk Ahead of Ford Boxing Match

In his recent Instagram video, the Iranian Hulk is seen absorbing punches to his abdomen. Then the footage quickly switches to him curling dumbbells. Gharibi follows that up with some unconventional training methods and then began throwing hooks with a resistance band.

Following those brief exercises, the Iranian Hulk starts lifting heavier weight and performed overhead barbell presses for a number of reps. After crushing the heavy bag with some big punches, Iranian Hulk switches to machine exercises, bends a bar through a bench and finishes off by pulling some weights outside.

Meanwhile, Martyn Ford has been training with a chip on his shoulder. Ford has trained with kickboxing champion Rico Verhoeven to acclimate his striking for the boxing ring. In addition, Ford revealed that he’s currently weighing in at 315 lbs (143 kg) and plans to leverage that size as much as possible in his looming fight with the Iranian Hulk. After the bout was postponed two weeks ago, Martyn made it clear that Gharibi was offered a chance to back out of the contest but opted to remain on the card and fight.

Eyes everywhere, even on my back 👀 pic.twitter.com/1h8xsa9rhM

Gharibi and Ford were slated to face each other in their respective MMA debuts. The potential fight was linked to happen with Polish MMA giant, KSW. In 2018, Ford inked a contract with the fighting promotion, but the bout never materialized despite interest on both sides.

The fight between the two massive combatants is scheduled to take place on April 30. With the famous O2 Arena set as the location for the marquee fight, a roaring crowd of 20,000 fans will make the night of fights even more special.

While Gharibi’s training may appear to be awkward, no one can deny that the Iranian Hulk knows how to sell a fight.