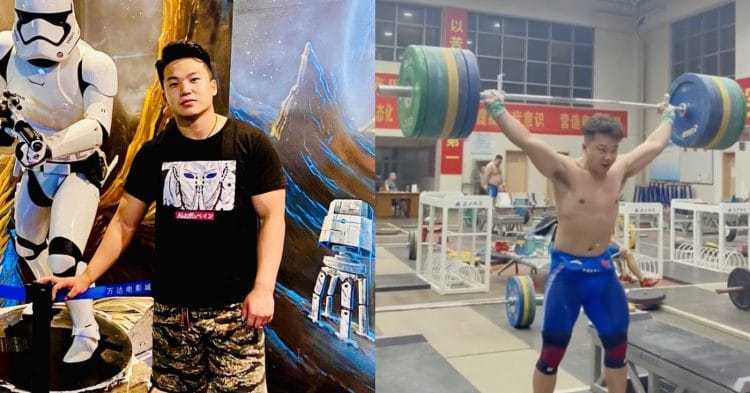 With the Tokyo Games having wrapped up a few weeks ago, some may have thought that this would be the end of incredible weightlifting performances, at least for a while. However Lu Delin proved that this is not the case, after a massive snatch variation in training.

Representing Team China in the 81kg division, Delin seems to be the only one close to challenging their Olympic athlete for the division, Lu Xiaojun. While Xiaojun went on to compete and win gold in Tokyo, it was only after a fierce competition with his teammate at the Chinese Nationals in 2020.

Currently Lu Delin is prepping for this year’s Nationals, which takes place later this month. Just two weeks out from this competition though, he shocked the world with an enormous 190kg (419lb) snatch done on blocks, which was posted in a video to Instagram.

To be clear, this lift was done on blocks, which does make it easier for Lu Delin to move this type of heavy weight. However there is still a lot of reason why this performance has the internet buzzing, and some wondering if he will be the future of China’s weightlifting team.

For starters, this 190kg snatch was a staggering 15kg heavier than the current world record in the 81kg division which Lu competes in, and 20kg heavier than what Xiaojun scored to win gold in Tokyo. As if that was not enough to be impressed by, it was also heavier than the gold medal winning snatch performed in the 96kg weight class in Tokyo, too.

That being said, if you are wondering where that puts him, without the blocks, Delin was also seen doing a huge 180kg snatch just a few days earlier. This was a battle, but it is clear that he is working to get better before the Chinese Nationals come along in about three weeks.

At just 23 years old, it seems like Lu Delin is almost certainly going to be stepping up and taking the place of Lu Xiaojun, in terms of the 81kg, sometime in the near future. It will be interesting to see how he performs at the Nationals, and where he stacks up with his fellow Chinese competitors.

Weightlifting as a sport has never been better, with a ton of impressive  showings out of the top young athletes around the world. This 81kg weightlifter is just the latest in this trend of the next wave of athletes.