See who scored big at the weightlifting competition that resumed in April 2021 after being postponed last year. 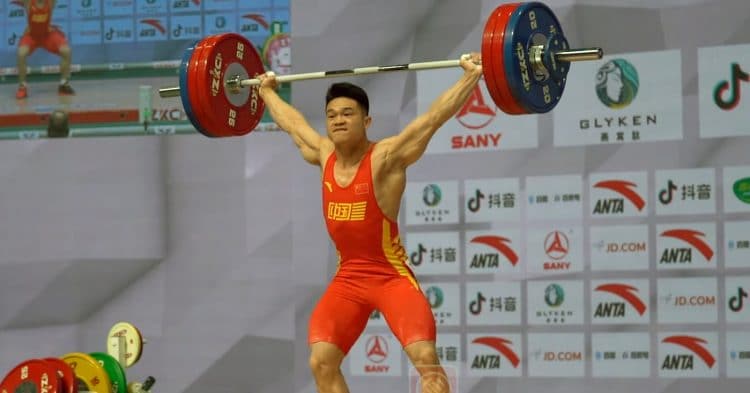 Today wraps up the 2020 Asian Championships (AWC) that took place in Tashkent Uzbekistan, April 16-25, 2021. The event was originally scheduled for April 18-25, 2020, however, due to the Covid-19 pandemic, it was postponed. It was the 49th men’s and 39th women’s championships and also a gold-level qualifier for the 2020 Tokyo Olympia Games taking place July 23-August 8.

Many of the world’s best weightlifters achieved world records both on the men’s and women’s side of which we’ve included below.

While all performances should be acknowledged, there were a few that stood out.

The clean and jerk record was also broken in the same weight category by Saikhom Mirabai of India.

For the +87 kg class, China’s Li Wenwen broke the world and Asian world record in the snatch and set two more world records in the clean and jerk and total with some monstrous performances, earning herself triple gold at the event.

On the men’s side, you have Shi Zhiyong in the 73 kg class who snatched the record in the snatch but this performance only improved upon the world record that already belonged to him. He eclipsed the record from the 2019 AWC by a kilogram.

Zhiyong also held all three world records in the 73 kg category but came up short of new records in the clean and jerk and total. But he had an all-around impressive showing nonetheless.

For the 81kg men’s, Lü Xiaojun initially broke the snatch worked record with a 174 kg/383.6 lbs lift, however, it was short-lived as Li Dayin eclipsed that number by a kilogram, snatching 175kg/385.8 lbs.

Lastly, for the men’s 109 kg category, two world records were snagged that were previously held by Simon Martirosyan of Armenia, although he still holds the total record.

Two men, china’s Yang Zhe and Uzbekistan’s Ruslan Nurudinov beat his snatch and clean and jerk record respectively, with a 220kg/441 lbs snatch from Zhe and 241kg/531 lbs clean and jerk by Nurudinov.

These were incredible performances from Asia’s elite weightlifters.

Training When Sick. Should You Hit the Gym or the Sack?

The 10 Best Back Stretching Exercises