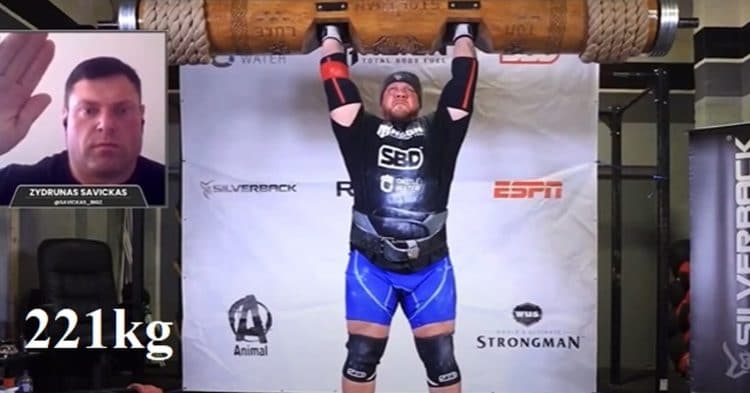 World’s Ultimate Strongman “feats of strength” series continued this weekend with the max log lift attempt. The contestants were Rob Kearney aka “World’s Strongest Gay” and one half of the famous Scottish Strongman duo of smiling brothers-Luke Stoltman. Rob was gunning for another American record and a crack a the world record while Luke was gunning for the British record and more importantly-the world record.

The warm-up sets went quite smoothly for both guys, with Rob utilizing his split-jerk technique and Luke using the classic more “stricter” jerk form which is popular with most Strongman. Then came the record setting sets and things got a bit shaky for Rob. He got the weight(220kg) up to his shoulders and even managed to lock out the arms but he was way underneath the log and couldn’t stabilize it and stand up from underneath. While Rob Kearney was resting before a second attempt at the American record, it was time for the Highlander to prove he has the best shoulders in Britain.

As you can see, Luke made that look very easy. He channeled all of his energy, like a DBZ character, into one single 221kg press overhead. Judging by that single lift, he easily had the world record in him, but it just wasn’t meant to be. Luke tried his best to press the record-breaking 230kg lift but he was just too drained, mentally and physically to get it. The good news is that he came out of the attempt uninjured with all of his muscles and ligaments intact, pretty beat up and sore, but still intact. He now has the WSM coming up in about a month or so and all the time in the world to sharpen the technique and strength to be the first man not named “Big Z” in over a decade to put his name next to a log lift world record.