World's Strongest Gay wasn't having the greatest of days today 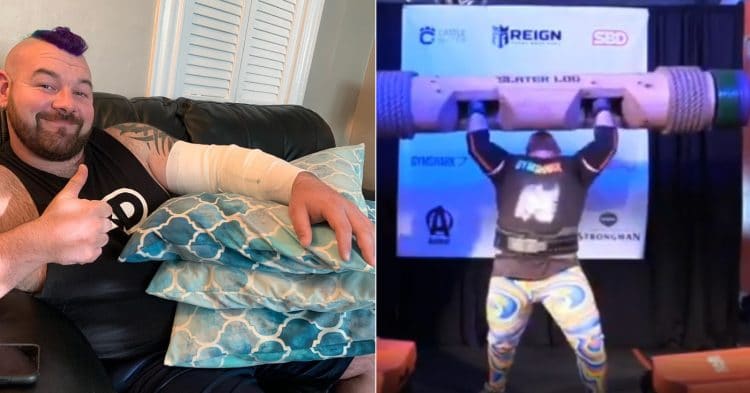 Rob Kearney is the currently reigning and defending American log-lift record holder. He took the record from fellow Strongman named “Rob”, Robert Oberst last year, and broke it earlier this yea again. The American log-lift record now stands at 217kg and Rob Kearney was looking as sharp as ever heading into today’s  Log lift record attempt. His warm-up sets went fine and he was firing on all cylinders looking strong and focused for that new American record.

Then as the record-setting weight came up….something just wasn’t right. Rob was very close in setting the record as he pressed the weight overhead but he couldn’t find the right footing to stand up with the weight in hands.  No worries, he regrouped, watched Luke Stoltman press 221kg on zoom, and probably thought to himself “if he can do, I can do it too!” and off he went for a second attempt to be crowned, once again, strongest shoulders in US.

Rob loads up the log, takes it up to the waist, and cleans it to his chest, the hard part is over. Now all he has to do is “just” lift the log above his head and keep it there for a second. Unfortunately for Rob, this just wasn’t his day as the log came crashing down from his chest with Rob holding his triceps in pain.

After going straight away to the ER, taking an MRI getting an official diagnosis. Rob did what every modern day sports persona does, he posted an update on his YouTube channel.

In the video above he basically says that the tendon is ruptured that he has lost all of his strength in the triceps but that the pain is minimal. The bad news was, he is looking at a potential 10-month recovery before he is back to competing again.

Which means no WSM, no Arnold Classic, and sadly-No Shaw classic as well.  But, looking at the bright side this is his first serious injury as a Strongman competitor and he’s still in his 20s. His road to full recovery should go faster than it would to a seasoned veteran who is in his late 30s and has accumulated a couple of these nasty injuries over the span of a career.