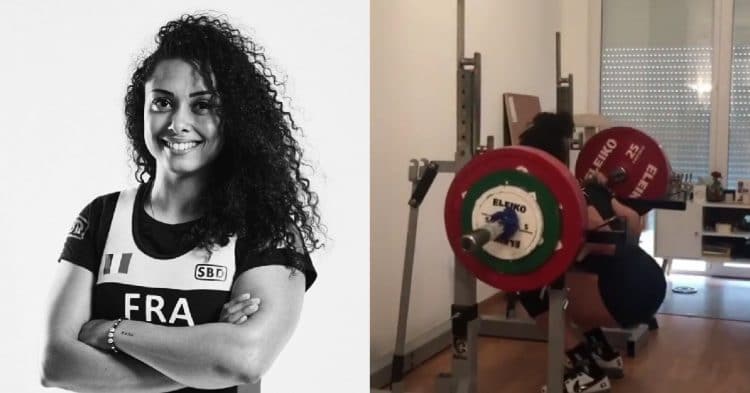 Lya Bavoil was looking to have a big performance before those plans got derailed. However, she did not let that stop her, as she decided to improvise and put on a show of her own, scoring some big lifts along the way.

Bavoil has been doing some pretty big things in the -63kg division. She won the IPF European Championship late last year, setting two records along the way. Since then, she has continued to look more and more impressive.

In fact, Lya was looking to show those improvements the next time she competed. Unfortunately, that got a bit more complicated as the current global health crisis prevented her from competing as she planned to. Regardless she would not be deterred, as she showed in a recent Instagram post. She decided to host her own mock powerlifting meet in her living room, where she hit some pretty big numbers.

“Quarantine Mock Meet – French Nationals
.
SQUAT : 200 kg / 440 lbs
BENCH : 105 kg / 231 lbs
DEADLIFT : 220 kg / 485 lbs
TOTAL : 525 kg
.
My coach and I choosed to not prepare this meet. No peaking no taper no rest still on training block and see what we could have put together. If someone would have tell me i would have done a mock meet lifting in my livingroom alone because of a virus.. i would have tell him to stop watching movies. But this is the fact … i’m happy and i’m lucky to still be able to lift. I can’t complain.. Hope everyone is home and safe ❤️”

This was a simply incredible performance from Lya Bavoil. To put it in perspective, her IPF records are for a 193kg squat, and 514kg total. Therefore, if she performed like this in competition as she had planned, this would have extended both of those records.

Bavoil had been working hard to improve her overall game recently. However, there is no denying that her squat game has taken serious leaps. Here she is, just prior to being unable to work out at the gym, hitting a 195kg squat.

It is clear that Lya Bavoil was preparing for some pretty amazing things the next time she competed. At 26 years old, she is only going to be improving from here.