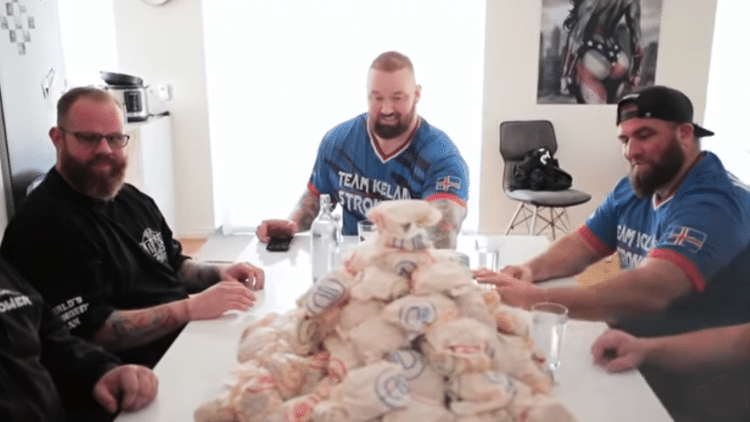 As one of the World’s Strongest Men, Thor Bjornsson has been known to eat a lot. Recently, he tried to out do himself, by eating 200 burgers in 30 minutes.

As it is, strongmen have crazy diets. Oftentimes, they take in an obscene amount of calories in a day, eating six or seven different meals. Thor Bjornsson is no different than anybody else, in that regard. Despite his relatively lean appearance, he packs on a ton of food in a day.

Recently, in a video he uploaded to his YouTube, Bjornsson tried to demonstrate just how much he can eat. In the video, he attempts to consume as many burgers as possible, within 30 minutes. He and his team get a staggering two hundred burgers, before taking them back home to attempt this challenge.

The rules are simple: each person has 30 minutes to eat as many burgers as they can. Additionally, they must keep the wrappers, so as to keep track of the burgers consumed. Moreover, each burger must be fully eaten and swallowed before the timer runs out, in order for it to count. At the end of the time, whoever eats the most, gets $500.

With that said, Thor Bjornsson and his crew got to work on eating. The men start off strong but begin to slow as the time ticks on. The seven men are doing their best, but they are trying to consume a ridiculous amount of food.

Here is the video of the challenge

When the timer goes off, Bjornsson and his friends are all groaning in pain, grabbing their stomachs. Bjornsson managed to eat a crazy 13 burgers. However, the winner somehow ate an incredible 18. It was absolute madness.

The remaining burgers were then donated to a local shelter, and the winner given $500. Despite the fact that Thor Bjornsson and his people were unable to eat all 200, they certainly made a dent. It is also safe to assume that they were feeling those burgers for the rest of the day.