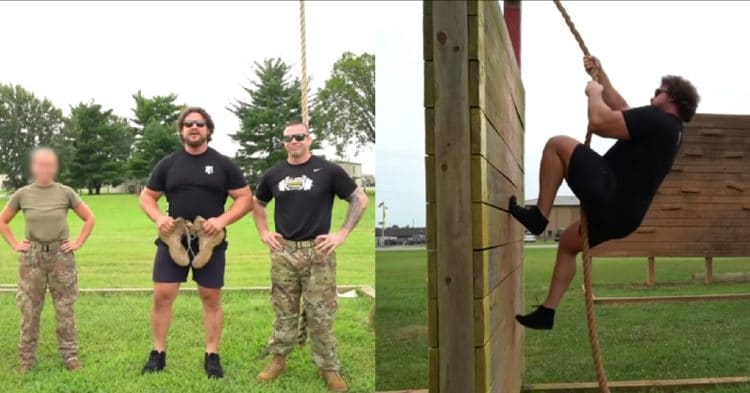 Just because Martins Licis is choosing to sit out this year’s World’s Strongest Man contest does not mean he is being lazy. He recently decided to put his skills to the test by working his way through the Army Special Forces Obstacle Course.

It has not been an easy road for Licis since winning the 2019 WSM, dealing with injuries and other issues that have prevented him from competing for months at a time. Obviously things were a bit quiet on the strongman scene for much of the year, with the global pandemic keeping events from happening as they should. However Martins made the decision a few weeks ago, that he would not be competing at the World’s Strongest Man this year, much to the disappointment of fans around the world.

That being said, Martins Licis is not taking any time off from doing crazy and insane workouts. He recently decided to put his strongman skills and athletic prowess to the test, by trying to complete the obstacle course used for training with people trying to be in the Army Special Forces. A video uploaded to his YouTube sees the journey from start to finish, as the 6’2 330lb athlete arrived in Fort Campbell, Kentucky to try this out.

Starting with a wall climb, Licis begins working his way through a wide array of various physical challenges. The test seems designed to test upper body strength, mobility, and endurance, by containing various climbing, crawling, and balancing activities meant to push you to your limits. Some notable moments from this video include Martins completing the Tough Nut (climbing over wooden x-shaped pillars without using his hands), getting terrified to slide down a pole, and trying to lift logs rather than roll over them, all before the halfway point of the course.

“I’m actually tired now. Like pretty damn tired. I’m halfway through, it’s taken me an hour and some-odd time to get here. Apparently the record to get through these 30-something course is 18 minutes. I think I’ve spent about 18 minutes standing here.”

Despite being exhausted, Martins Licis finishes the course. By the end of it, he is too tired to even speak for an outro, silently thanking the people who helped him through the course. As incredible of an athlete as he is, it is clear that it takes a different level of athleticism to make it in the Army Special Forces, or get past the obstacle course.