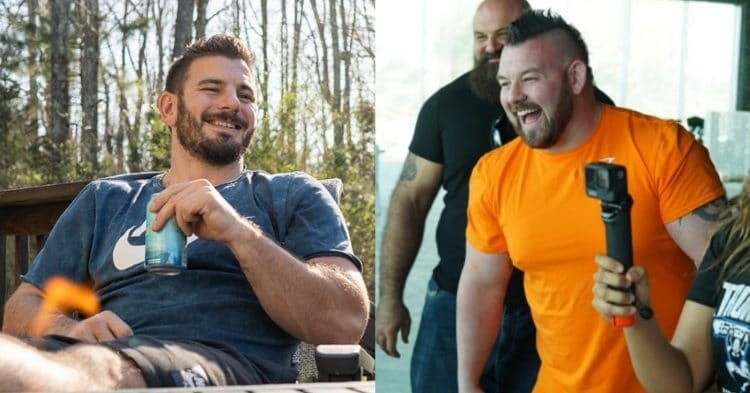 We have discussed many times now how strongman and CrossFit are two very different sports with very different needs. However they are crossing over a bit yet again when Mat Fraser and Rob Kearney sat down to discuss how one sport can benefit the other.

Fraser and Kearney have been known to be friends, with the strongman even doing a recent row challenge that he accepted from the five-time Fittest on Earth®. With Rob formerly doing CrossFit before moving to strongman, they have rather similar interests.

Apparently these interests have led to them even working together a little bit as Rob prepares for some upcoming contests. The pair sat down for an interview on Kearney’s YouTube channel, where he revealed that he will be utilizing Mat’s forthcoming HWPO training program to help get ready for the contest.

That was not all that was discussed either, as Mat Fraser discussed what life has been like for him since retiring from CrossFit competition earlier this year. While things are much different, he says his life is as busy as ever.

The way Mat explains it, is that there is a surreal feeling of anxiety, not doing the high intensity workouts that he was usually responsible for when staying in tip-top shape for CrossFit. Now that this is not the case, he is finding other ways to stay busy.

“Now I’ll wake up and the first instinct is ‘Oh  my god, I’ve got to do rowing intervals, squats, all these different things,’ then it’s like ‘Oh no, I don’t have to do any of that. That’s awesome!'” Fraser said.

Nowadays, Mat says he and his partner Sami are staying super busy completing all fo the things that he was not able to do because he was so busy. Not to mention preparing to roll out the new HWPO program and his new coaching role for Hybrid Performance Method.

One of the main things that this program focuses on, is getting athletes properly conditioned to the level of what CrossFit demands. He and Rob joke about how much different that conditioning level is, compared to strongman.

However that is what Mat wants to help Rob with. He even offers to bring the strongman to Vermont, so that they can work together on boosting his conditioning, which was clearly a problem when Rob did that rowing challenge.

“I remember hearing stories of some of the other strongmen doing their conditioning for the day, and it was like a ten minute walk. Get out of here. That’s it?” Fraser said, as both men laughed.

“I’ll be excited for when you get the programming, and I’m sure there’s going to be some modifying,” Fraser added, in reference to Rob trying the HWPO program.

“Then getting you up to Vermont, and in the gym (where it is) fully equipped. Everything under the sun is going to be in that gym. I want to see your training.”

The pair go on to discuss the difference that Kearney would have to make to the HWPO training program. Fraser admits that the type of cardio-heavy approach that is common may not be the best for someone like Rob, as it is not conducive to strongman success.

With Mat in his corner, it will be interesting to see the changes that Rob makes by his next contest, which is just the beginning of a packed schedule for the year. Mat will help him not just with cardio, but with dealing with the intensity of strongman training.

At the end of the day, it is clear that these two have a tremendous amount of respect for one another, and the differences that their two sports have. It is going to be fascinating to see the product of Mat Fraser and Rob Kearny working together.