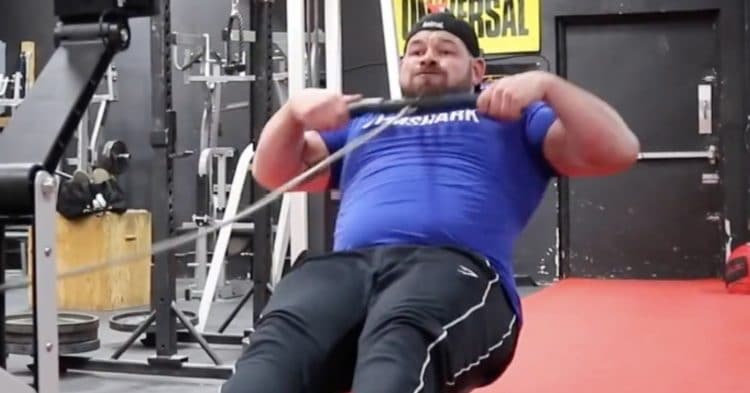 Strongman athletes are not typically known for having top notch cardio. However Rob Kearney decided to put his heart to the test, by accepting a challenge from five-time Fittest Man on Earth® Mat Fraser.

Over the years, Kearney has built himself into an elite strongman and a fan favorite as well. He initially gained attention for being the first openly gay strongman athlete, but that quickly began a side note, as it became clear that he had a ton of skill to back this up.

These skills were perhaps best on display when he was crowned the first ever pound-for-pound strongest man, an honor that he was proud to receive. Since then, he has been dealing with some injuries, but recently he returned to competition, to participate in the WUS Strength Island event.

Now, just a few short weeks after competing here, Rob Kearny has returned to the gym for a training session. However this was no ordinary gym day, as after he completed his chest day with a press session, he decided to take on a very unique challenge.

The way he explained in the video to his YouTube channel, Rob was challenged by the recently retired Mat Fraser, five-time winner of the CrossFit Games. This was to see how quickly the strongman would be able to complete a 500-meter row.

“So I was talking to my friend Mat Fraser. He wanted to see how quickly I could do a 500-meter row. I told him I would try it out. Now I feel like that was a dumb decision,” Kearney explained.

After setting the row machine to 500, Rob got to work. All things considered, he was actually keeping a really solid pace, which lined up with his prior experience with CrossFit, which he did before transitioning to strongman.

Unfortunately, Rob Kearney was not able to complete this challenge, falling short at just over 400 meters. He did this in a time of roughly 61 seconds, according to the time on screen.

“Obviously I need to work on my conditioning,” he said, while clearly exhausted.

Obviously there is no shame for Rob Kearny to not be able to complete this challenge. While there are some similarities between strongman and CrossFit, the latter is far more dependent on having an unyielding gas tank.

Either way, it was quite entertaining to see him attempt this challenge. Perhaps he will give it another go sometime soon, if he gets his cardio up even more.