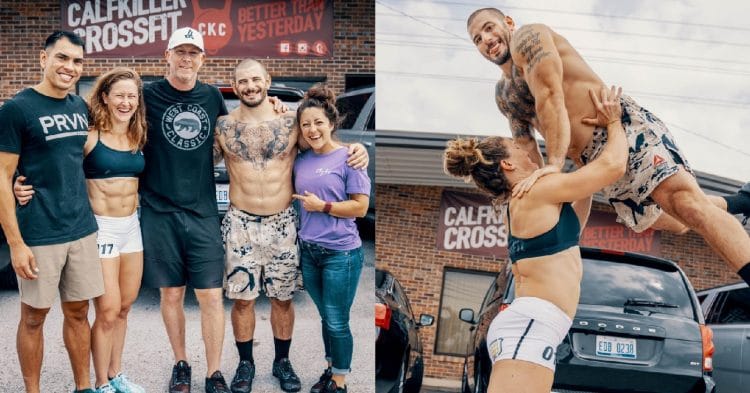 Last weekend saw Mat Fraser and Tia-Clair Toomey utterly dominate Stage One of the 2020 CrossFit Games. Following their impressive performances, both athletes give their thoughts on the competition.

Headed into this year’s unique Games, people were unsure what to expect, other than the fact that Toomey and Fraser would be tough to beat. This proved more true than some even expected, with both athletes blowing through the competition, setting a wide margin on Day One, and keeping that same energy on Day Two. They will be among the 10 athletes to compete in Stage Two of the Games next month, in Aromas, California.

Following such a wildly impressive weekend, both Tia-Clair Toomey and Mat Fraser wanted to give their thoughts on how things shook out. Taking to Instagram, Tia-Clair posted a message, thanking her team for helping her prepare.

“What a great couple of days full of fitness! 💪🏼👏🏼

This wouldn’t have been possible with the help of this team; THANK-YOU so much to everyone who was involved helping with the set up, clean up & getting everything we needed for @mathewfras & I to do our thing.”

Toomey then followed this up with a bit of a funnier post, showing respect to her teammate, Mat Fraser. Moreover, she expressed her excitement to keep working and compete in California, for the in-person finals.

” A huge shout out to this stud for dominating yet again. @mathewfras 💪🏼 (This photo reflects the story of my life, always carrying him. 😜🤣JOKING! 🙃)

However, on a more serious note, the job is not yet done. A lot to work on from now until the ranch and I can not wait to get stuck into it. LFG!”

Fraser also wanted to take to Instagram to celebrate his performance at the Games. The four-time Fittest Man on Earth showed some love to his team, before explaining that he will be taking a couple of days off, then getting back to the grind.

“I couldn’t have asked for a much better competition. Thankful for having such an amazing team on my side. Now it’s time to enjoy a couple days off, and then the real training begins!!”

Some other athletes who performed well at Stage One of the Games, were fan favorites Noah Ohlsen and Brooke Wells. Although neither could beat Mat Fraser and Tia-Clair Toomey, they each scored second in their respective divisions. Both shared similar messages to their social media, saying they were proud of their performances but look to improve before the finals in October.

“2nd place in the first Stage of the @crossfitgames only means the work ain’t over yet!!!! What an amazing weekend. I truly enjoyed every minute of it. And that is because of the TEAM I have behind me. It seriously takes a village & I am so blessed to have the best one ♥️”

“This story is still being written! ⁣
⁣
I feel overwhelmed with gratitude that I‘ve earned a spot as one of five men who will compete at the @crossfitgames finals in California next month. It’s a once in a lifetime way to close out such a unique season.⁣
⁣
I promise y’all that I’m committed to digging in as hard as I can for the next four weeks and doing everything in my power to make this thing exciting. I won’t let our trip to Aromas be filled with one single regret! Who’s coming with me?⁣”

Although Tia-Clair Toomey and Mat Fraser had the best performances, everyone looked good in Stage One of the 2020 CrossFit Games. Stage Two will take place October 19-25th, at the Ranch in Aromas, California. It is going to be exciting to see how these five men and five women look at the finals.

How Quickly Should You Gain Weight When Bulking?