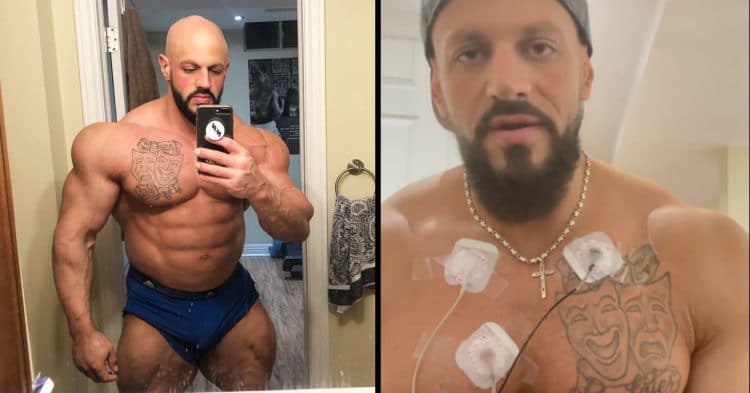 The subject of steroid abuse in bodybuilding is one that most try to avoid talking about if they can help it. However Mike Wheels has decided to do the opposite, recently speaking out on the effect of his use over the years.

Canadian bodybuilder Mike “Wheels” Cipriani has been competing as an IFBB Pro for a few years. While he has not reached heights like the Olympia, he has made appearances in the Vancouver Show and Toronto Pro in his time in the sport.

However Cipriani is making waves in the sport right now for a completely different reason than competing. He recently decided to open up on Instagram about his steroid abuse, and the effects that it has had on his body and health.

“What I want to do is actually tell you guys and inform you guys on making the right decision for you. I’m not pro steroid or anti steroid, I’m pro do the best decision and make the right calls for your health for your livelihood,” Wheels said.

While hooked up to a heart monitor, Mike made it clear that this was not to tell someone what they should and should not do. He just wants to encourage people to make the right call and work with a trainer that has your best interests at heart.

“Not every trainer has your best interests, and that is where I kind of fell into that pool. I was with a coach at the time, I’m not going to drop any names, you guys will figure it out pretty quickly, but doing an obscene amount of insulin, and that for me, was definitely the trigger that put my heart overboard,” Mike Wheels said.

From there, Mike explains that it as tempting as it may be to push your body’s limits with steroids, your health is more important. So he says that it is key to make sure your coach is looking out for you, and that it is okay to ask them questions if you have concerns.

“For bodybuilders, guys if your coach has you taking 30, 40, 50 IUs of insulin a day, he’s not for you. In fact, he’s not for anybody and he actually shouldn’t be allowed to train people,” Wheels said.

“You have to make sure that when you’re with somebody you can’t just do what they say necessarily. Ask questions and do your own research… It’s pretty easy to say ‘Okay I’m hiring this guy for a reason. Obviously I’m going outside my comfort zone but I’m going to give this a run,’ and that’s what my thought process was…

From there, Mike explains that he understands that there are some coaches and trainers who let their ego get in the way and get mad when people ask questions. However if you have concerns about what they are doing, it is necessary to look out for yourself and your own health.

“Do your research, steroid.com is always a good source. If you decide to take this path, and your coach is helping you, ask questions. Please, for yourself, for your family, and for your health down the road. I know when you guys are young you think you’re invincible, I did too,” he said.

As a result of the decisions he made, Mike Wheels explains that he has likely suffered permanent damage to his heart. He just wants to make sure that he does his best to stop others from making the same mistakes as he did.

We have seen countless times, the type of repercussions that come from steroid use. However they are clearly a part of bodybuilding that will never go away, so it is important to make smart and informed choices.