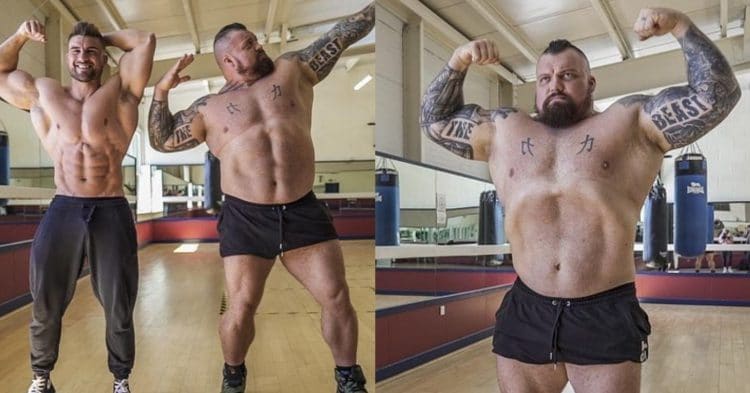 Retired strongman Eddie Hall is currently training to make his debut in the boxing ring later this year. However following this, he could be headed to the bodybuilding stage, after a recent training session with bodybuilder Ryan Terry.

Over the years, we have seen Hall try has hands at all kinds of strength sports. Of course there is strongman, where he was a world champion and record holder, but we have seen him dabble in the likes of CrossFit, and even Olympic discus throwing.

Most recently Eddie has been hard at work to prepare for his boxing debut. He is set to face rival and fellow retired strongman Hafthor Bjornsson this September, to settle their beef once and for all.

After that is over though, we might just see Eddie Hall taking to the bodybuilding stage. At least that’s what it seems like, after he had a recent training session with Men’s Physique bodybuilder Ryan Terry.

Terry is an IFBB Pro who has competed in a wide variety of contests, scoring as high as second at the 2016 Olympia. Eddie shared a post to his Instagram of the two working through some posing, with the strongman somehow even doing a vacuum pose with the bodybuilder.

“With the king of aesthetics @ryanjterry and must say what a sound bloke too 👊🏻” Hall wrote.

“Here’s me teaching him how to pose for maximum points, even got him to hit a vacuum 🌪 😉 💪”

It was crazy to see Hall running through some of these poses, especially the vacuum. Obviously it was not the craziest vacuum we have ever seen, but considering it came from a 6’3, 355lb strongman, it was still pretty impressive.

Terry shared a few other shots from this training session to his own Instagram. He jokes about the idea of Eddie competing on the Open stage soon, and even says that he took a punch to the gut from the strongman, which will be interesting to see in their forthcoming video.

“Is there anything this man can’t do😜… @eddiehallwsm the beast trying his hand at bodybuilding 👊🏼 who knows, after his boxing career we could see an open class contender 😜👊🏼 big shout out to Eddie Hall for today, I had a great day thank you and I even got punched in the stomach as an ever lasting memory of the day 😏😤🥊 “

In all seriousness, it is unlikely that we will see Eddie Hall competing as a bodybuilder at any point in the future. That said, this is still something entertaining to see he and Ryan Terry working together.