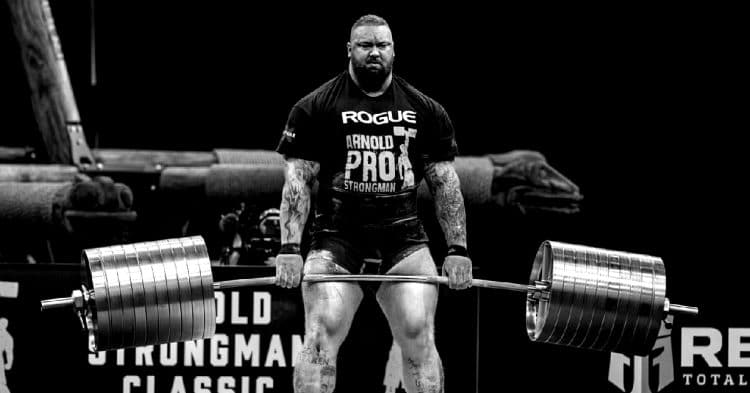 These days the entire world is one giant lockdown and everything is looking like a Mad Max movie.  The streets are empty, everyone is wearing some makeshift facial protection looking like a Mortal Kombat character and every major sporting event is either canceled or postponed.  With the list of postponed and/or canceled major upcoming sporting events including the Olympic Games and Soccer European Championships, it should come to no surprise that the  World’s Ultimate Strongman event in Bahrain is also postponed.

The event was supposed to happen in mid-April and some Strongman even excitingly whispered about a potentially biggest payday ever in Strongman history.  The now postponed show was also set to feature the mythical 501kg deadlift attempt. The 501kg deadlift was supposedly set to happen under the same circumstances(deadlift suit, figure eight straps, calibrated plates, deadlift bar) that Eddie Hall‘s 500kg deadlift was and The Mountain has been eying that record for some time now.

As the popular saying goes;  If  The Mountain cannot come to Muhammed, Muhammed will come to The Mountain and now Hafthor will be attempting his 501 kg deadlift in his home country.

501kg is coming!! I’m super excited for this opportunity! Unfortunately due to the circumstances regarding Covid19 and the world wide actions being taken to prevent the spread, I will have to attempt this in Iceland and alone besides a small team of under 20 people. I’m excited to announce that in partnership with @worldsultimatestrongman we will be doing this live for you guys at home!! Check out the link in my bio if you want to tune in on May 2nd! 💪💪💪
.
Edit: This will be recognized as a world record as there will be an official/judge there to make the call, and the event will be held to the same high standard that competitions are. I will be making the attempt with a suit, figure 8 straps and a deadlift bar.

So there you have it, It’s on like Donkey Kong! In about 40 days’ time, we will potentially have another deadlift world record. Will Hafthor make it? Seeing as his deadlift has exploded in recent years and he does 450kg for reps in training and without a suit, it’s hard to imagine him NOT being able to pull 501kg.

How To Build A Cast-Iron Grip