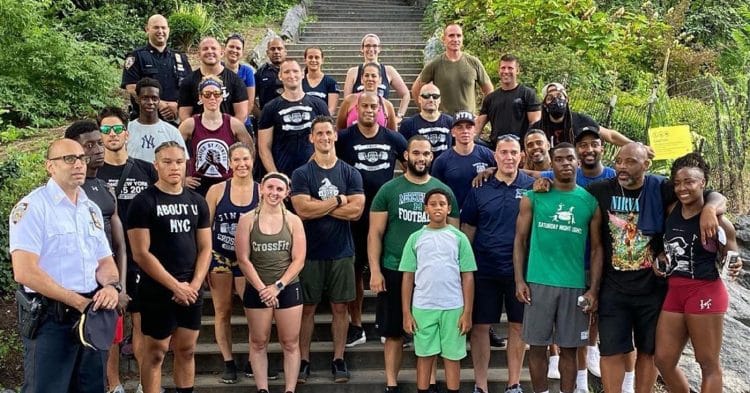 Across the United States, tensions are high between people of color and law enforcement. However several members of the NYPD were able to unite with members of a youth football team in Harlem, with a connection founded in fitness.

NYPD CrossFit is an affiliate that centers around members of law enforcement, made up of around 250 members. It has police officers from every precinct in Harlem, as well as the Chief of Counterterrorism, and members of the Housing Authority. They have been a mainstay in the city, advocating for fitness among officers of the law.

Over the years, the co-founder of this NYPD CrossFit, Lt. Ronald Perez, struck a relationship with Syn Martinez, the previous owner of CrossFit Harlem and founder of Afrobrutality Sports. Therefore Syn was willing to step up when reached out by members of the affiliate, in an effort to unite the community, under the goal of community fitness. Together, about 40 police officers and the members of the Harlem Jets Youth Football team got together in Morningside Park, to have a workout session.

Martinez has explained that he plans for this to just be the first of such events. In doing so, he hopes that he can help to facilitate better relationships between these two opposing groups. Under the banner of a hard workout, it is his belief that this provides a level playing field for the youth to better understand the NYPD, and vice versa.

“In the gym we can get both groups to the table to talk about things like fear-based decisions, hand-to-hand combat, and all the other pressing issues that have been points of tension while we have them in the gym and on a level playing field,” Martinez said. “One of the biggest obstacles has always been the inability to simply have a conversation.”

This is a touching move of NYPD CrossFit and the youth of Harlem. In a nation riddled with rioting and rising tensions between law enforcement and citizens, this provides a lovely contrast. Martinez has revealed that other law enforcement agencies hope to follow suit in these efforts, and the more that happens, the better things will end up being.