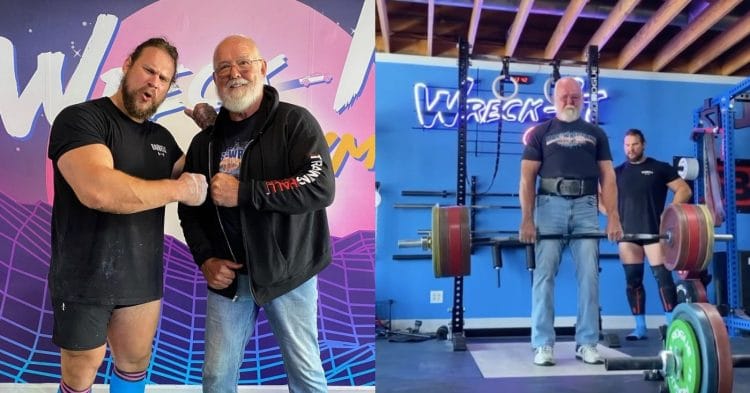 At 71-years old, there are very few people who deadlift 451lb for one rep. However strongman veteran Odd Haugen pulled that weight for three reps during a recent training session alongside Martins Licis.

During his time in the sport, Haugen has become well known as one of the best strongman in the world. He won numerous strongman contests in his prime, and was dubbed the Strongest Man in America in 1999.

However things did not stop of Odd as he aged, competing in the World’s Strongest Man all the way until he was 56 years old, and continuing into Master’s WSM competition after that. Furthermore, in his later years, he has set a ton of interesting records, most notably the Thomas Inch Dumbbell record that he claimed at 66 years old.

Nowadays, Odd Haugen trains with 2019 WSM winner Martins Licis, and is still quite active in the world of strongman. In fact, he showed in a recent video posted to Martins’s YouTube channel, that at 71 years of age, he can still kick it with the best of them.

When the video cuts to the training session, after Martins talks briefly how he has been increasing the intensity of his own sessions after dealing with injuries, we start off seeing Odd showing solid footwork on the agility ladder. From there, he moves to some farmer’s carries along with Licis, taking 210lb for a ride.

Things then got interesting with Martins Licis and Odd Haugen moved on to snatch-grip deadlifts. He began the sets with a 234lb pull, and defied logic by making it look like child’s play, before doing the same with 322lb.

Next up was 366lb, which he both he and Martins failed, Odd still being unable to get it with a belt. However he showed that he was not done when he pulled this weight using a hook grip instead, which got the respect of Licis.

“I couldn’t budge it, he budged it,” Licis noted with awe.

The magnum opus of the training session came when Odd Haugen did his best to complete a five rep set of 451lb. While he was only able to do three reps in the end, it was still an incredible display from someone who is, as Licis put it “over 70 years old!”

To closer out the session, Odd Haugen did some ring pull-ups for good measure. It was one of the most insane things to see, especially since he was give Martins Licis a run for his money, in spite of being a so-called senior citizen.