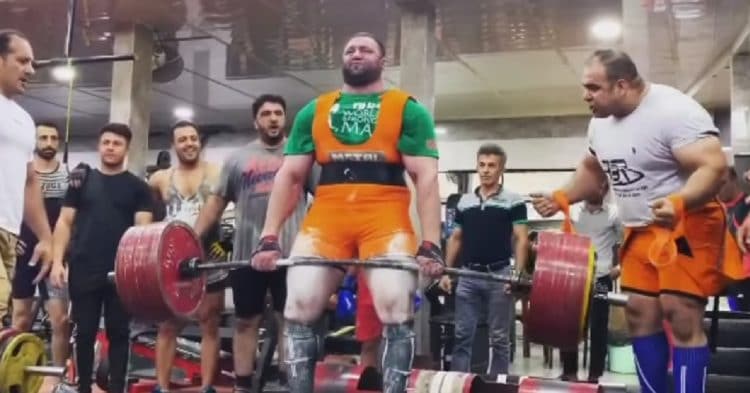 Iranian strongman Peiman Maheripourehir already has some massive deadlifts in his resume. However he is gunning for the world record, and a recent video showed that he very well could achieve it.

32 year old strongman Peiman Maheripourehir has been able to achieve some pretty incredible feats over his tenure in the sport. He scored 2nd in the 2018 Iran’s Strongest Man, and has qualified for the World’s Strongest Man on two different occasions. At every step of the way he has proven to be a force of nature, doing some impressive work.

One of the things that Peiman is known most for is his uncanny deadlift skills. These were on display in a big way recently with a recent post to his Instagram, when he landed an unbelievable 1050lb pull. However things did not end there, as he called out Hafthor Bjornsson, saying that he was after the Icelandic strongman’s 501kg deadlift world record. In fact, he specifically said that he will be going for 505kg in five or six months time.

“Here you are. The Mission Accomplished with the poor infrastructure in Iran. 476kg at 160kg BW, the third heaviest deadlift in the history.
What’s next? Be Alarmed @thorbjornsson the 505kg is coming in 5-6 months. I believe we had an early retirement. Am I right the Legend @eddiehallwsm ???
Definitely the magic weights are coming so watch this space if you don’t wanna miss any thing.

With his sights set on the world record, Peiman has been doing all kinds of work in the gym. Just a few weeks earlier than this epic lift, he was deadlifting some more heavy weight. Here he is doing a double with a solid 1003lb, doing it with ease.

These types of deadlifts from Peiman Maheripourehir are showing that he really is a legitimate threat to the deadlift world record. He did not set a specific date for when he will attempt the 505kg pull, but it seems like he is going to be ready when that time comes.

GZCL Training Programs: An Array of Programs To Match Your Every Need