Hafthor "Thor" Bjornsson is the new king of the deadlift! 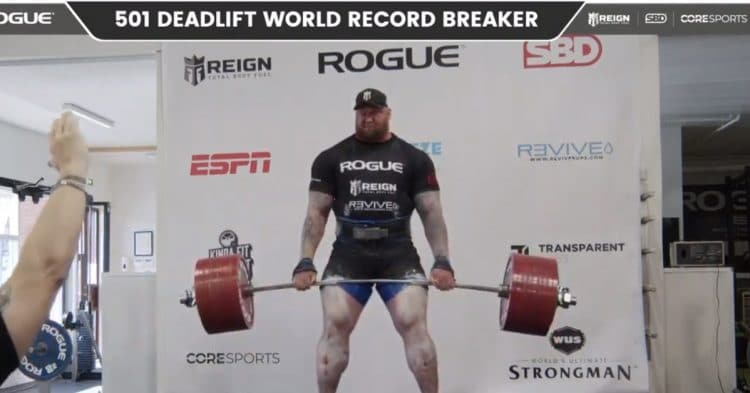 “Hafthor Bjornsson set the all-time deadlift world record with 501kg as part of World’s Ultimate Strongman to become the first man to ever deadlift more than 500kg. The attempt was broadcast by ESPN and live-streamed on Rogue and Corepsorts.”

He then tried to break Eddie Hall‘s all-time deadlift world record (500kg/1102lbs) at the same competition but could not complete the 501kg/1105lb lift.

But the 30-year-old Arnold Strongman Classic champion has clearly made massive improvements since then. Bjornsson set an unofficial Elephant bar world record (480kg/1058lbs) in February and then he smoked 470kgs/1036lbs last month live on Twitch which was his last heavy session before the big day.

The 2018 Worlds Strongest Man champion has explained several times that he was feeling more ready than ever to attempt the world record as part of World’s Ultimate Strongman. He certainly looked the part based on his recent training sessions. And despite all of the opposition from fellow competitors and others, due to him not competing the lift in an actual competition because of the current health crisis, he still showed up.

Watch the 501 kg deadlift record below:

The lift made history and now, he’s the new king of the deadlift. Many might still say he needs to do it in competition. But we think he’ll come back and prove once again that it’s an easy pull for him.

Now check out the other World’s Heaviest Deadlift performances of all time!

How to do the Barbell Hack Squat (Legs)