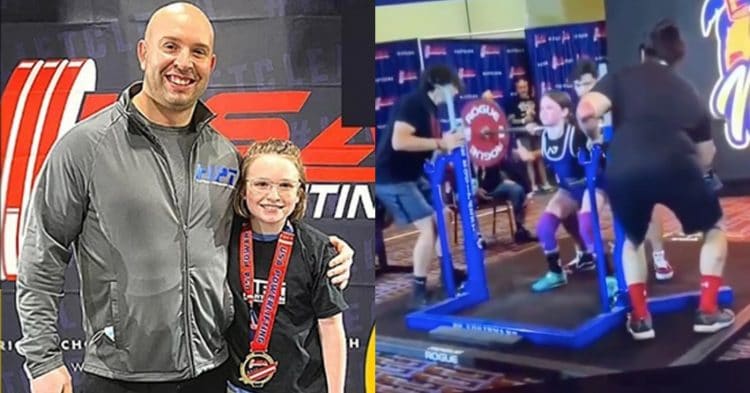 Powerlifting is a sport that sees athletes from all ages able to find success. This even applies to ten year old Claire Mainous, who just scored herself an American Record with her incredible squatting skills.

Indiana’s own Mainous loves to have fun competing at powerlifting meets. However it is about more than just that for her, as she has also shown an incredible amount of skill with what she does, making her a real threat for the future.

This was put on display recently, when she competed in a recent powerlifting meet, scoring a new American Record with her incredible 177.5lb (80.5kg) squat. You can check out a video of this incredible performance, courtesy of USA Powerlifting’s Instagram page.

The Future Is Bright For Claire Mainous

There are a plethora of young powerlifting talents to keep an eye out for, but Claire Mainous is by far one of the most promising. At just 10 years old, there is practically nothing stopping her from growing and developing into one of the best lifters in the world in the years to come.

Training out of Hartman Performance Training, in Bargersville, Indiana, she has already broken numerous records in her home state. Now she’s moved on to American records, and the entire strength sports world is left in shock.

Mainous competed for the first time last October, and it was clear from the start that we were looking at something special. She was the only one competing in her division, but she went 8/9 on her lifts, and was even able to deadlift nearly twice her bodyweight.

SHE’S ONLY 10 YEARS OLD – 170lbs DEADLIFT•The future of HPT has arrived! Little 10 year old / 86lbs body-weight, Claire Mainous, coming through with a solid 170lbs. deadlift!!!!•This lift is 2lbs under a double body-weight lift for her.•This little one went 8/9 in her very first meet and could be well on her way to great things at HPT. Her father is willing to make the drive and I'm willing to help her become a future champion.•If there is one thing I can spot, it is the championship mentality. Many good lifters and athletes have walked through my doors, and the ones that stay and sacrifice the normal life, win national and world titles. •At the meet the spotters mis-loaded her bar and one side was too heavy (around 180lbs.) and threw her off. When I told her she was going to get another lift, she brushed it off and was not upset, but knew what she needed to do. Her dad and I put some more baby powder on her legs, she tightened up her extra small lifting belt and came back to make THIS lift in great fashion.•While I can't predict her future, I can spot talent and she definitely has some. Time will tell, but it's great that her dad and family are willing to help and support her in this journey.####youthstrength #youthstrengthtraining #youthstrengthandconditioning #youthpowerlifting #firstmeet #futureisbright #talent #girlswhopowerlift #girlswhodeadlift #girlswholiftheavy #hiddenpotential #championshipmentality #toughness #toughcookie #hartmanperformance #hpt

Mainous followed this up with another meet earlier this year, again walking away with a win. This was at the 2021 USAPL Beyond Limits Classic on February 13th, and she was able squat 154.3lb, as part of her 421lb total.

The fact that just a few months later, Claire was hitting 177.5lb on the squat demonstrates the exact kind of rapid growth and improvement that you would hope to see from someone so young. It just serves as further proof that her future in the sport is about as bright as it could possibly be, and there’s a lot to look forward to in the years to come.

Powerlifting has become an avenue for a variety of athletes, of different ages and backgrounds to find success. Claire Mainous is just the just example that you can never be too young to do something great.