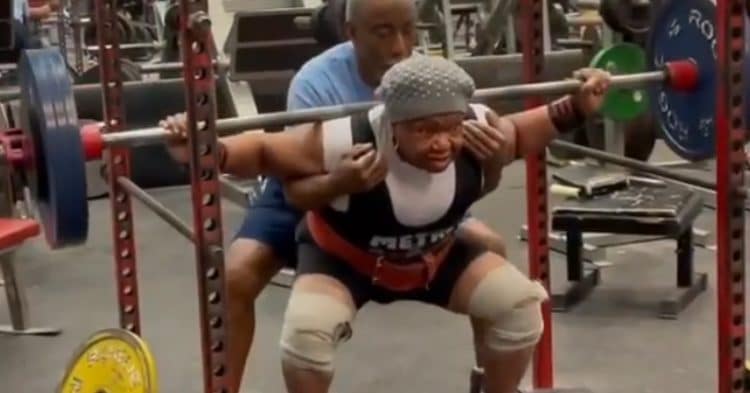 Nora Langdon is a 78-year old powerlifter who has been crushing world records since 2007. She currently holds 19 world records across two separate weight classes and has won 20 of the last 22 competitions she’s been in. This week Nora Langdon nailed a 159kg/350lb squat in a training session and did so with a lifting suit, belt, and wraps.

This is someone that gives beginner powerlifters something to aspire to.

Check out her squat from the Powerlifting Legends Instagram.

This is not the most she has lifted but it is impressive all the same. Nora Langdon has not been able to compete as much this year and like many other powerlifters has been sidelined due to the global pandemic.

That she is in training this week is a hopeful hint that she’ll soon be making her return to competition, once again.

Her best competition lifts are as follows:

Nora Langdon’s most recent personal best was a win at the 2020 American Powerlifting Federation (APF) Michigan State Meet. She competed in the 82.5kg weight class at the bench press only meet. She pressed a 72.5kg/159.8lb bench press.

Prior to that, Nora Langdon won at the 2019 American Powerlifting Federation (APF) Nationals. Her total was 420kg/925.9lb.

Nora Langdon has been competing since 2007 and on a steady winning streak. She’s won in 20 of 22 competitions, and taken 19 world records from those wins. Most of these records are from the 90kg weight class.

It is clear Nora Langdon is a competitor, and she plays to win. The pandemic may have put a dent in how many comps she can be in right now.

However with a squat twice her body weight in training, at the age of 78, Nora Langdon is saying something very clear: she’s not done yet.

We’ll let you know what happens next.