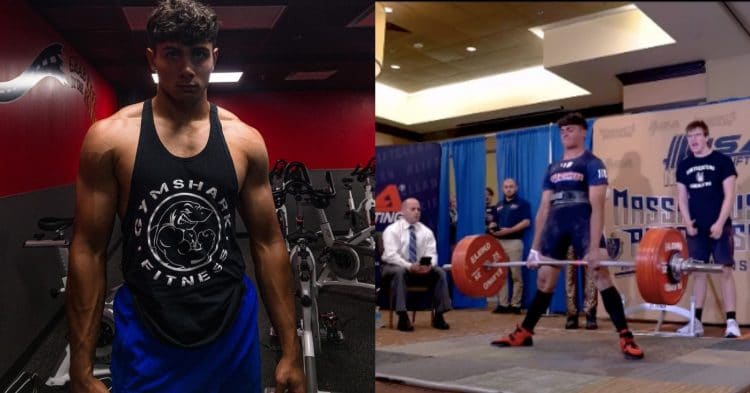 At age 17, teen powerlifter Antonio “TJ” Marrero is starting to carve a path in the sport of powerlifting that is seemingly going to be legendary. He took a massive first step in that direction by scoring a deadlift record recently.

Given how young he is, it is no surprise to hear that Marrero is not very experienced, having started his competitive powerlifting career earlier this year. However he is already off to a great start, and putting up some massive numbers.

The most recent of these came at the USA Powerlifting (USAPL) Massachusetts/Rhode Island State Championships, earlier this month. Here, as you can see with the below post from Instagram, he set a new T2 American Record in the 74kg division, when he deadlifted 623.9lb (283kg) raw.

These are TJ Marrero’s lifts from this meet:

This was the best performance of TJ Marrero’s young, three competition long career with each lift, but the deadlift was by far the most impressive, as it was also an unofficial world record for the under 18 division in the IPF. However things almost did not turn out that way, given the way things had started during the meet.

TJ shared another angle of the deadlift in a different post. Here he explained the difficulty he went through after missing his first attempt, and that he was questioning himself during the jump from 584lb in his second attempt, to the record-setting 623.9lb on his final attempt.

“Best moment of my life. Going into this I missed my opener due to losing balance at the top and falling forward. This happened last meet and I almost bombed out after doing it twice in a row. This time I was FURIOUS, it never happens in training so I was so confused why it kept happening at meets,” Marrero explained.

“The plan was to go 601 on my second but @xavilus thought it was best to go 584 and it turned out being the better option. It moved slow and most ppl would think I’m crazy for taking such a big jump to 624. But I had to, I told my coach ‘load the record, if I don’t get I don’t get it’. Now if I miss this lift my state record will be robbed of me by @aoodhann, I will not have the American record obviously, and I will not walk away with my first 600 pull.

“I was willing to take the risk because it’s the only shot I had at attempting the record since I leave the teen 2’s in a few weeks,” Marrero added. “Somehow I ended up actually pulling it off and in that moment I was the happiest I’ve ever been in my life, the feeling was indescribable.”

There are a lot of incredible up and coming teenagers in the powerlifting scene, and TJ Marrero is officially added to that list after this performance. With this being just his third outing as a competitor, it will be interesting to see how the rest of his career pans out.