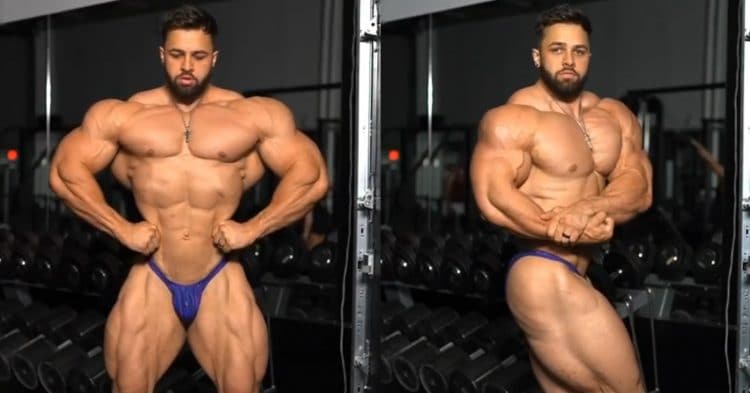 The last few weeks have seen Regan Grimes really begin to amp his training up. Now we know why, as he checks in with his shredded physique, as he is preparing for competition.

At 27 years old, Grimes is an ultra exciting Canadian bodybuilder. Although he is a bit small for Open competition, he has somewhat straddled the line between this and Classic Physique. However it was the latter of these two divisions that led to his first professional win, at the 2018 New York Pro. Despite that, he decided to return to Open, showing himself to be an interesting prospect. The general consensus is that, if Regan can pack on some muscle mass, he has the physique that can cause people problems in the future.

It seems that Regan Grimes has been working hard to do just that, as he has been showing lately. Recently he posted a physique update to show off his progress, while contemplating which upcoming contest he will compete in. The amount of improvements he has made are pretty substantial, and he looks to be in tremendous shape. Not only that, but he also shared some advice for up and coming athletes.

“LOADING… Chicago Pro or Spain Pro
Just want to drop a few words of advice from my competitive experience.
1. Enjoy the process as much as possible (we are lucky we get to do this everyday!)
2. You vs. You – Making improvements year over year is the goal. Everyone progresses at different rates, but as long as you are progressing that’s all that matters!

3. You can’t control who shows up on game day, but you can control what you do every damn day…so make sure you do everything you can to be your best
4. If you don’t get the result you wished for and you did everything in your power to be your best then you go home and get your ass back to work and come back better then before.
5. STAY HUMBLE x HUSTLE HARD 🤙🏼”

In the post, Grimes contemplates whether or not he will competing at the Chicago Pro in late October, or the European Championships in Spain a couple weeks prior. Either way, he looks to prepared and at the beginning stages of preparing to peak. Even compared to how he looked last month, you can see the amount of improvements and growth to his physique.

For the most part, Regan Grimes still has a lot of the qualities of a Classic Physique bodybuilder. He still has that tremendous symmetry that he is known for, as he has begun to fill out his frame. It makes it interesting to see how he will perform, whether it be in Chicago or Spain.