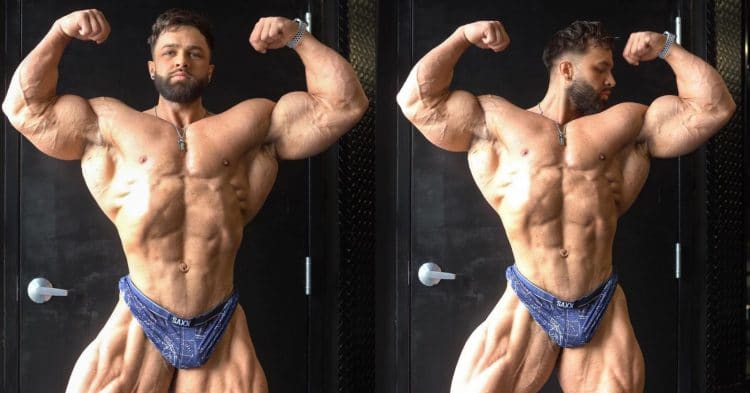 Over the last couple of years Regan Grimes has shown some serious potential, but has yet to fully bring it to bare on stage. However his recent updates ahead of the 2021 Mr. Olympia are showing a much improved physique.

For a while, Grimes has been looked at as a big prospect in the Men’s Open Division, ever since he made the transition from Classic Physique. Unfortunately his first appearance on the Olympia stage as an Open competitor did not go as well as he may have wanted, coming in 15th place overall.

Now Regan is looking to bring a better package this year, and has been grinding throughout the entire year to make that happen. Three and a half weeks out from the 2021 Olympia, he posted a physique update to his Instagram that shows the fruits of that labor, and it is safe to say that he is looking much improved.

“Finishing up my Hamstring & Glute workout thought I would hit some poses and see how we are looking!” Grimes wrote.

It looks like Regan has added a good amount of mass to his frame over the last few months, bulking up in all of the right places. His arms are looking bitter, his lats are fairly wide, and his legs look to have some pretty decent separation, at least judging from this view of the front.

It is not exactly clear how this will translate on stage, or how much he has improved upon his back, but looking at this shot, Regan Grimes has looks about as big as he ever has been. This is a result of his strict diet, something he opened up about in the caption of the post, sharing what kind of food he is consuming at this point in his prep.

Grimes is looking improved from the side too, as he displayed in another update that he shared. In this post he can be seen hitting a side pose, giving a much better look at the separation in his legs, as well as his shredded triceps.

To be clear, Regan Grimes still has a lot of work to do, but judging by the way he appears in this recent update, he could very well be a top ten competitor on the Olympia stage. Without a doubt that, he will almost certainly do better than 15th place this year, considering how good he is looking.