Regan Grimes is looking to get back to action at the upcoming IFBB Japan Pro show. Ahead of this, he is training hard, and looks incredible.

Grimes is one of the most talented competitors to the Open Bodybuilding division. As a winner of the 2018 New York Pro, his debut at the 2018 Mr. Olympia was highly anticipated. Although in the end, he would only score eight place in his first crack at the Classic Physique Olympia.

Grimes would take some time off, after this lackluster showing. However, he returned last weekend, to take the stage at the 2019 Romania Pro. Subsequently, he earned a much improved third place at this show, demonstrating how hard he had been working in the interim.

However, Regan Grimes is not finished with competing in 2019 just yet. He is looking to make a quick turnaround, in order to compete at the IFBB Japan Pro on November 17th. As a result, he has been back in the gym, training vigorously yet again, looking to make more improvements. He uploaded a video to his Instagram, showing off his chest workout in preparation for this event.

Grimes looks incredible in this video, getting in some hard work. As part of his effort to make changes, he parted ways with coach Chris Aceto, earlier this year.

Therefore, now that he is working with Dorian Hamilton, it seems they are making serious progress. Apparently they have a much better working relationship, which is making an impact. At this rate, he looks like he could be a top contender at the 2020 Mr. Olympia.

The Japan Pro goes down on November 17th, with athletes from around the world looking to compete. It will be exciting to see how Regan Grimes looks when he takes the stage. Although if this footage is any indication, he will be impressive. 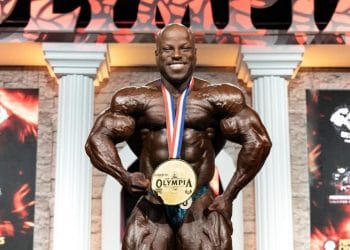