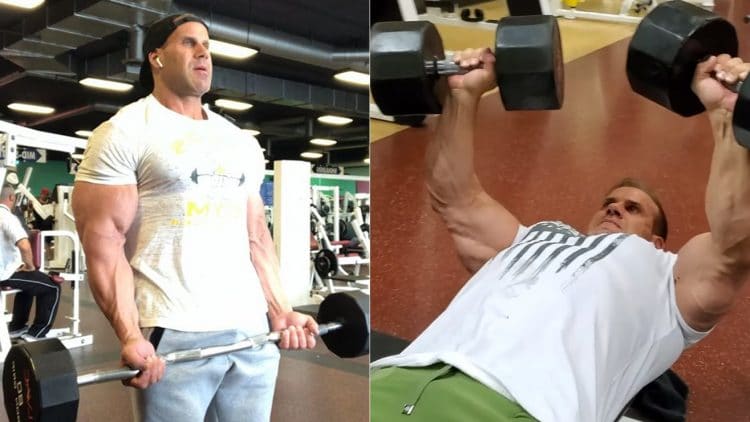 Four-time Mr. Olympia (2006, 2007, 2009, 2010) Jay Cutler takes us through another one of his training days in his home of Las Vegas, Nevada; which involves pre-workout (Cutler Nutrition Prevail), calf and chest training, tips, plus lots of re-racking weights in the gym (from other gym-goers).

Cutler is such a big influence and role model in the bodybuilding community and fitness in general, due to his involvement in the industry which includes his supplement brand Cutler Nutrition. Not to mention, he was the chosen honorary ambassador for the 2019 Olympia which took place in September.

But we’re definitely fortunate to be able to learn some tips and tricks, while also following the life of a true champion through his YouTube videos. And he’ll continue to churn them out for his fans.

So, check out Jay Cutler’s recent workout video where he does some calf training (starts at 3:48) followed by a high volume chest workout… (workout details are provided below).

After the workout, Jay Cutler hopped on the scale (he weighed 256 pounds) and then finished off the video by talking a little about his progress, and the actual workout itself, explaining that this training video is a new format he’s trying out.

But one aspect of the workout he really wanted to stress was how much he likes the dumbbell pullover since he can really focus on the chest by stretching, contracting and focusing on the muscles. And he also explained how important it is for him to focus on the mind/muscle connection in general; which was apparent during the chest session.

Then, Jay Cutler ended by explaining how he wants to improve the quality of his physique rather than focusing on getting bigger on the scale says. He also brought up “next season,” and the fact that people are talking about him coming back to Olympia. And he jokingly commented, “It’s a wide-open division”.

Now, we’re not sure exactly what Jay Cutler’s plans are for next year, but we know he’ll be involved in some way other than promoting his supplement brand. And we’ll be sure to fill you in on the latest endeavors of the four-time Mr. Olympia.

Jay Cutler maintained himself as one of the best bodybuilders in the world for 12 years. In a recent video,...