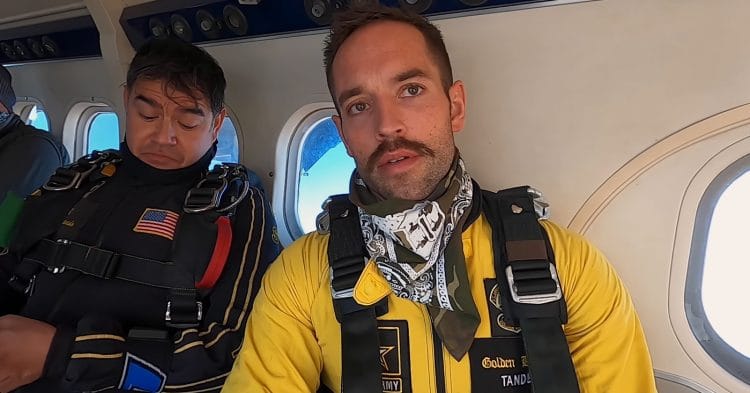 It is almost as if the CrossFit athletes don’t do enough to show us their heroic qualities. We aren’t surprised when we see it from the United States Army, but going above and beyond to jumping out of a plane has yet to make the events list of a CrossFit Games. But they did it anyway.

CrossFit Pro Rich Froning and his Mayhem Nation crew met up in Elizabethtown, Kentucky, at Fort Knox to work with the U.S. Army Golden Knights for a tandem parachute jump.

On board to help them were Major George Fruth of the U.S. Army, recruiting outreach commander and a logistics officer. They also had Captain Rachel Shriver and Sergeant Jacob Faff who works as a 15 Tango UH-60 Blackhawk mechanic.

Captain Ashley Shepherd, a military intelligence officer with the U.S. Army Award Fitness team was also on board.

Colonel Mega Stallings the commander of the marketing and engagement brigade. Addington field in Elizabethtown, Kentucky with the US Army Golden Knights, aka the US Army parachute team talked about the initiative.

“The purpose of the Golden Knights or the U.S. Army Parachute Team is to connect America’s people with America’s Army and they do that through a variety of different ways. They have three main aspects of their team. One is what we’re here seeing today which is their tandem team. So their tandem team gives the thrill of a lifetime the experience of a lifetime to different individuals from across the country.”

The U.S. Golden Knights have been around since 1959 and are based out of Fort Bragg, North Carolina. They have two demonstration sections that travel around the country and support air shows and major league sporting events.

They also have the tandem section which is the crew that Rich Froning and his team met here.

Rich Froning mentions that he’s jumped out of a plane before, while his team is working hard to keep it cool. He tells them that the hardest part is when it feels like the wind is pulling your face back during the jump at 140 miles per hour.

After the jump, Froning and his entire crew were happy to have done it, noting the members of the U.S. Army on board that helped them were “true professionals.”
Froning was nodded to try a solo jump next time. He didn’t even blink before saying, “Let’s do it.”

How to Train to Survive the Zombie Apocalypse!