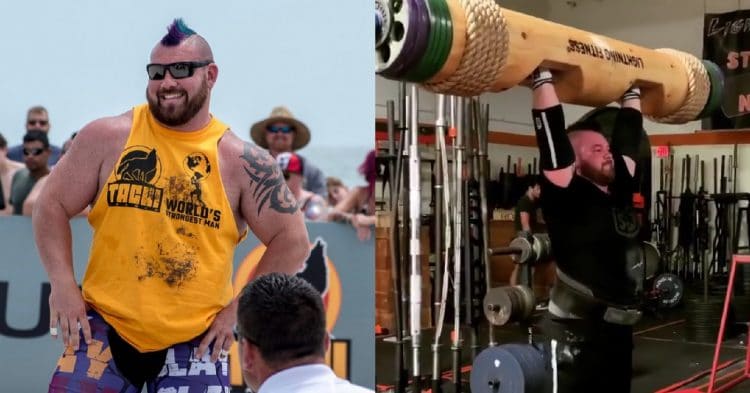 Earlier this year Rob Kearney was able to score a new world record for himself. Now he has his sights set on a different record, after smashing through a gigantic log press.

Dubbed the World’s Strongest Gay, Kearny has firmly established his place as one of the best strongman athletes on Earth. Not only that, but he has actually earned the official honor of being the pound-for-pound strongest man in the world, after winning a contest hosted by Eddie Hall. This was a massive honor, and one that legitimized his skills and proved how talented he truly is.

Currently Rob Kearney is gearing up his prep for the 2020 World’s Strongest Man, and he is hard at work with the task at hand. He recently posted to Instagram to show his progress, and it seems like things are coming along well. The video he shared was of a massive log press, that saw him hoisting a 465lb log and making it look easy. Not only that, but he apparently is setting his sights on this world record as well.

“Quite possibly the easiest 465lb (211.4kg) log press I have ever done!
———
Watch out @luke.stoltman and @grahamhicksuk I want that World Record too!!!”

Kearny explains how easy this lift was for him, and it certainly seemed that. To be honest, it even looked easier than the press he did for the aforementioned contest just a few weeks ago. His submission for the log press saw him taking 454lb overhead, and he definetly looked good doing so. However the fact that he has already improved some more shows how much better Rob gets with every training session.

Heading into this year’s World’s Strongest Man, there will be a lot of big names missing from the roster. Therefore Rob Kearney has a chance in front of him to steal the show, provided he is able to be fully prepared. He is going to have a lot of opposition in front of him who are thinking the same things, but if he can come at his best, he has a good chance at walking away victorious.

4 Methods For Busting Through Lifting Plateaus