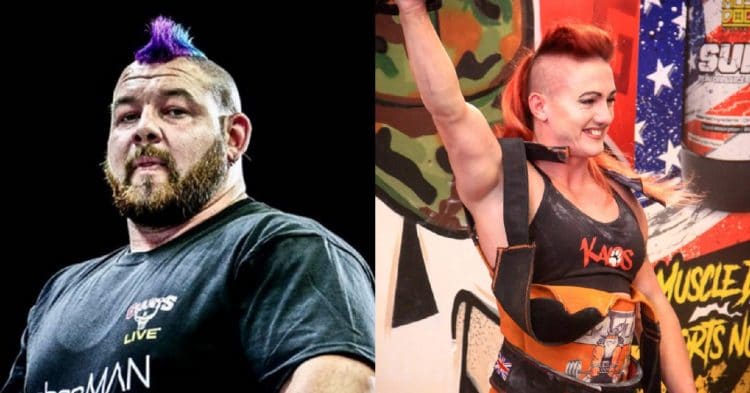 As strongman and strongman competitions, Rob Kearney and Rhianon Lovelace already hold some pretty big distinctions. However they recently got an honor that will likely put them down in history books forever.

When strongman champion Eddie Hall revealed that he was looking to find the strongest male and female athletes in the world, it got the strength sports world buzzing. The idea was that he, in partnership with Original Strongman, would have athletes submit their best deadlift and clean and press. These numbers would be compared to the bodyweight of the athlete to determine the pound-for-pound strongest.

Now the competition has run its course, and the results are in. “World’s Strongest Gay” Rob Kearney, and 2018 World’s Strongest Woman Rhianon Lovelace have been awarded the first honors of pound-for-pound Strongest Man and Woman. For Rob, he was able to deadlift 421kg and clean and press 206kg, with a bodyweight of 131kg. As for Rhiannon, she was able to pull 261.7kg and clean and press 101.4kg, while weighing 66kg.

“IT’S OFFICIAL!!! I AM THE POUND FOR POUND STRONGEST MAN IN THE WORLD!!” Kearney said about the news.

This was extremely impressive for both of these athletes. Kearney is looking to perform big at the World’s Strongest Man later this year, so this, as well as his American record log lift earlier this year, will be a great boost in confidence headed into the contest. His critics have always considered him a little small for strongman, but he proved here that this does not mean he is not powerful.

“I am Officially the Lb for Lb Strongest Woman on the World!! 🌍💥🥂

Lovelace was clearly proud of her performance and results. Moreover she seems rather happy with the $10,000 prize she won in the process. She is also riding some serious waves of momentum, off the back of a world record Atlas stone hoist a few months ago.

Congratulations are in order for both Rhianon Lovelace and Rob Kearney. This was a unique new contest from Eddie Hall and Official Strongman, and it will interesting to see if it continues moving forward. It puts a new spin on the sport, and bestows focus on complete and overall strength, rather than raw power.

Dwayne “The Rock” Johnson and Family Test Positive For Covid-19