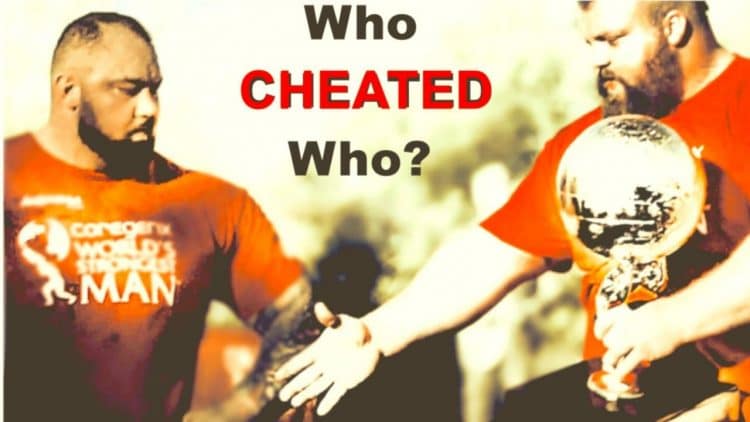 Eddie Hall and Hafthor Bjornsson are currently both preparing for their boxing match against each other which will make both men several million dollars richer. The tension between the WSM winners has been brewing ever since Eddie won WSM in 2017 by outpointing Thor by a single point. Thor refused to shake Eddie’s hand when Eddie congratulated the number 3 (Brian Shaw) and number 2(Thor) placed men next to him and verbally attacked Eddie and head referee Colin Bryce for colluding and conspiring together so Eddie Hall could get the win that year. Thor has been a bit less vocal about the incident in the following years but every time the issue was brought up, Thor was adamant that he was cheated out of a victory.

The controversy occurred during the Viking press event, in which the athletes were instructed that they would not be allowed “double-dipping” of the weight. What that basically means is that you can’t bend your knees twice on the same rep. If you used a jerking motion to move the weight up you have to maintain straight knees throughout press, throughout the lockout all the way until the beginning of the second rep. When the event occurred, Thor was clearly seen slightly using momentum during the event and bending the knees, which was not allowed.

The never before seen footage in the video above, shows Collin Bryce explaining to the competitors about the specific rules in that event and even using Thor as an example as he has a tendency to lockout in a way which could be specified as “double-dipping”. The revelations don’t end there, as the footage shows “ref cam” POV and official commentary intended to the WSM organizers, from head referee Collin Bryce. The footage clearly shows Thor being a wee bit too fast on the down signal and “double-dipping”.

The mini-documentary also offers some other interesting tidbits, such as other athletes chiming in with their opinions and basically everyone saying he just wasn’t in the right that day.  All this was impossible to go without a commentary from the “The Beast”, Eddie Hall.  Eddie basically applauded the footage and claimed that him and Thor used to be friends and even praises him as one of the best Strongmen ever. However, in Eddie’s words his “yes men” got to Thor and threw a giant shadow over Eddie’s historic WSM victory in 2017. Eddie, in typical Eddie Hall fashion, promised to beat the sh*t out of Thor next year in their boxing match and his “yes men” should they appear in the ring come fight night.

As of me writing this, Hafthor has yet to give his side of the story. He is focused on slimming down for his showdown with Eddie next year and is taking training seriously. However, much like his arch-nemesis Eddie Hall, Hafthor isn’t a man who will go cower in silence and wait for the storm to blow over. If I was a betting man, I would surely bet on Hafthor responding and giving his take on the newly found footage and Eddie Hall’s comments.