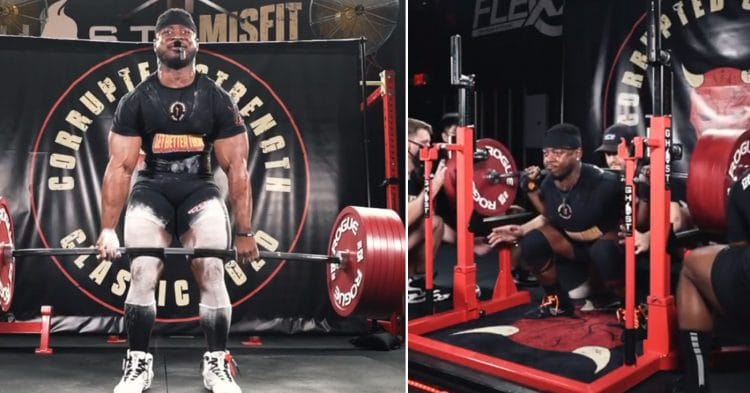 At 25, with only five years of competitions under his belt. Russel Orhii is worrying his competition by showing he’s determined to stay at the top of the game in his weight class. The phrase “best in the world” is not one that is new to him.

This week he took to the gym to add a few new personal bests to his unofficial record as he prepares for his next competition and came out destroying his “old world record total of 1,836lbs/833kgs with a total of 1,907lbs/865kgs total on Saturday.

Russel Orhii took to Instagram to showcase the squat that put him over the top. He described the total of 1,907lbs/865kgs as one that “completely destroys my old world record total.”

After the deadlift, he said on Instagram he had a “little bit left in the tank on squat and bench!” He noted his final deadlift attempt was coming out of my left hand, and he said it probably wouldn’t have gone his way in an IPF sanctioned meet.

“All things being said I’m comfortable saying that this performance can transfer over to an actual meet next year! This event seriously had the environment of an actual local meet. I surprisingly had game day butterflies when it was time for the lifting to start 😂”

After the post, Russel Orhii thanked the team for an amazing mock event, including the refs, spotters, loaders, lifters, spectators, and friends. He also noted he is hoping the Corrupted Strength events can become sanctioned events in the future.

His fans were certainly proud of him, and were commenting things like, “Why am I yelling at the screen like I’m there?” Others called him “incredible,” a “legend,” and noted, “ridiculous total mate, absolutely killed it.”

His squat for this event was a personal best for him. We previously reported on a higher squat for him where he beat that personal best in some gym work where he crushed 715lbs like it was just a warm-up.

The 429.9lbs bench and 716.5lbs deadlift he got at the IPF World Classic Powerlifting Championships in June 2019.

Russel Orhii’s statistics certainly prove he is a force to be contended with in his weight class. Over the last five years he has performed in 11 sanctioned events, of which he has come out with gold in 10 of them.

He knows the rush of back-to-back wins, and has done well from 2017 to 2019 with his former personal best from the 2019 International Powerlifting Federation (IPF) World Classic Powerlifting Championships.