An unusual but intriguing twist on the controversial slap championship 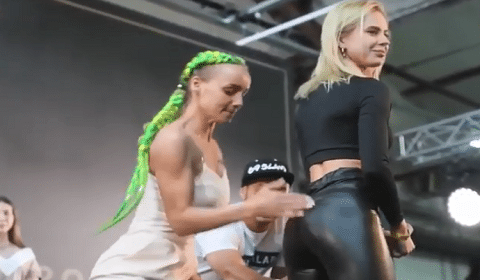 By now you are probably fully aware of the insane awesomeness that is Russian slap championship. However, I’m willing to bet you never heard of Russian ass slapping championship!

It is the spin-off nobody asked for but everyone is surprisingly okay with it. Hot fit chicks slapping each other’s asses to find out which Russian fit chick has been doing her Slav squats and who has been slacking off. So, per Rt.com article-these are the rules, yes I said rules.

The rules are unsurprisingly simple: the competitors, who all share a keen interest in working out, take it in turns to slap the other on the booty, putting to the test the results of their squat regimes.

The winner is the first to administer a slap hard enough to the other’s behind to knock them off balance, causing them to fall over or step forward, avoiding any serious harm, which is in stark contrast to the men’s version

The sport made it’s debut a few days ago at a face slapping event and judging by its coverage and mass fan appeal…it’s not a stretch to say that we will be seeing more of the Ass slapping championship. I would like to take this paragraph to suggest a few aesthetic changes to the competition.

You see, in the face slapping tournaments, the guys are usually slapping the life out of each other topless. Now, since this is 2019 and Women should be treated equal as men, I suggest that female competitors in the ass slapping contests should be encouraged to not wear any pants while they compete.

Hadi Choopan has developed a reputation for being one of the most consistent Men's Open bodybuilders in the IFBB Pro...

Calories Burned Burpees Calculator The burpee exercise is nearly 100 years old, as it was invented in 1939. Despite the...