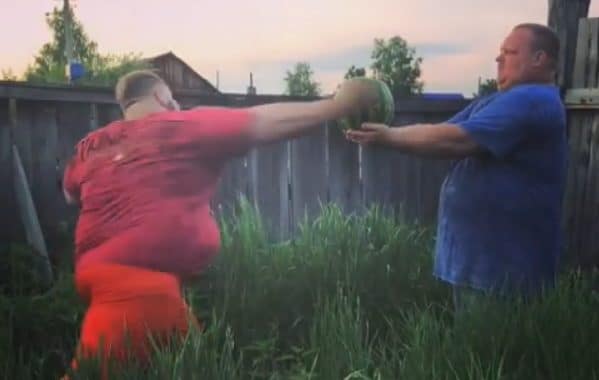 Russian Slap championship is as hardcore as it sounds like. Russian dudes are giving each other CTE for shits and giggles sake and chump change in cash. This very fringe and extreme contact sport also has a dominant and scary undisputed champion that obliterates everyone in sight. The dominant monster is named Vasiliy Kamotsky known on the internet as the “The Russian Farmer” but among his fans and fellow competitors, he is known as “Pelmen” ( “The Dumpling”). He got the nickname to the fact that when he signed for the slap championship, he also signed on for a dumpling eating contests, which he won. He is a simple man from Russia that wields the power of “farm strength” and uses his powers for good…or evil, depends on your viewpoint of slap fighting.

To demonstrate how truly horrifying his powers are, Vasiliy demonstrated on an innocent watermelon. It was an interesting and terrifying twist to the old “watermelon challenge” that makes his rounds on your Instagram feed every now and then. Only this time he used his secret weapon, the slap of death. The results won’t shock you, but it will make you think twice before even considering going to Russian and competing in a slap championship