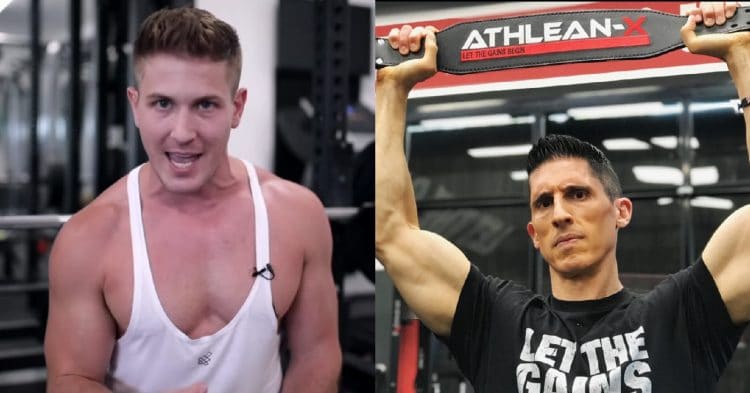 There has been a ton of controversy surrounding YouTube fitness channel Athlean-X, for their apparent use of fake weights. Fellow fitness YouTuber Scott Herman has now put Jeff Cavaliere on notice for what he is doing.

Things have been tense in the YouTube fitness community, as Athlean-X, one of the biggest channels for fitness tips on the platform, was accused of using fake weights. In particular, there was a video Cavaliere, who runs the channel, posted that shows him deadlifting 495lb, with what has been called out as fake weights. This controversy has run rampant throughout the site, as several people have since made videos pointing out the fake weights, and tearing Jeff down.

One person who has been particularly vocal about his displeasure with Athlean-X, is fellow YouTuber Scott Herman. He had been one of the first people to call Jeff Cavaliere out for his fake weights, naturally getting pushback from Jeff’s supporters. He recently uploaded another video to his channel, comparing the deadlift with fake weights, to one that was recently uploaded, seemingly using real weights. Moreover, he calls for Cavaliere to issue an apology over using the fake weights.

“Another video came out, a recent video from Jeff at Athlean-X, where it kind of looked like he was basically packaging the video around him doing heavy deadlifts,” Herman said. “That’s how it came across to me, and the reason we’re even talking about this, is because about a month ago people started noticing and calling Jeff out on using fake weights on some of his lifts. I even made a video about this myself. I said in my video ‘Hey you know what, sometimes you’re doing long photo shoots or video shoots, you get tired, maybe you’re using fake weights to get through the day without killing yourself, because you still have your own training to do, other work to do, whatever the reason might be.’ I’ve been on photoshoots where there’s fake weights, and in that aspect I don’t think it really matters. You’re not claiming to lift a certain amount of weight.

“But then it came to my attention after I made the video, that Jeff was claiming he was doing a touch-and-go with 495lb on his deadlift,” Scott continued. “After closer inspection its a lot more obvious that he’s trying to make his body and his mouth, and he’s like yelling. He’s trying to make it look like it is real weight, when in fact it isn’t.

“So with this whole thing happening, a lot of other YouTube channels have been making videos calling him out on this, as they should,” Herman went on. “I’ll use myself as an example. I did a response video to Greg Doucette on what’s obtainable naturally, in terms of building muscle. In that video, I fudged up some of my numbers, and didn’t even realize that I did it, until people called me out.

“After seeing all this stuff go down, I made a response video, and I said ‘Hey, it looks like I messed up some of my numbers. Sorry about that. Didn’t mean to. Here’s a video from six or seven years ago where I did the same studies and I didn’t mess up the numbers,’ and I re-presented that data and corrected myself, then I moved on with my life.

“There’s nothing wrong with being fact checked, but I do have a problem with the double standard where the people who are fact checking everybody else, don’t fact check their boy.”

From there, Scott Herman goes on to explain that it is okay for people to admit they messed up or do not know everything. However he feels that Jeff Cavaliere is not doing that, even when several people have called him out on the fake weights. Scott then spends the rest of the video breaking down the differences between the real and fake deadlift, all the while saying that Jeff needs to at least address the situation.

What do you think of Athlean-X using fake weights?

The Strength Training Mistakes You Need to Stop Making NOW!

When it comes to splitting up a workout, there are a number of ways to get the job done, but...

The triceps muscles of the upper arm are involved in so many daily tasks from scooting out of bed to...

If you spend too much time on the fitness side of social media, chances are you will come across a...

Sylvester Stallone recently had the internet buzzing with a video that appeared to see him using fake weights. Fitness YouTuber...

Sylvester Stallone is a beloved figure in Hollywood, as well as the world of fitness. However his legitimacy is being...