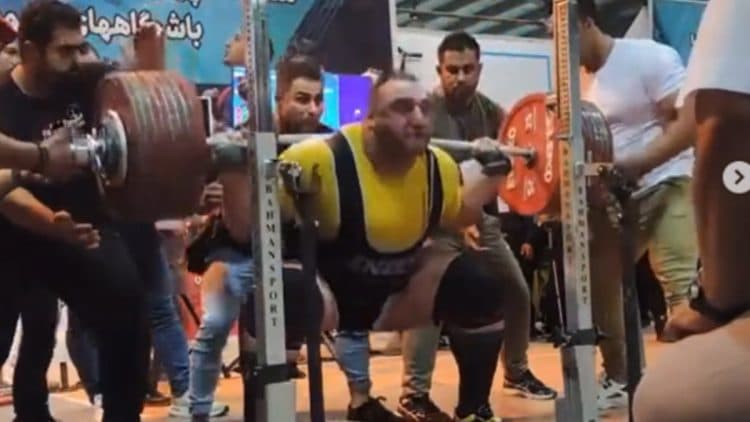 The squat sensation from Iran, Shahram Saki, has taken part in a sanctioned powerlifting competition and scored a plethora of achievements. He competed at the 2022 IranBBF National Classic Powerlifting & Bench Press Championships, which took place from April 12-17 in Chalus, Iran. Shahram won the raw 120+ kg weight class, with an incredible performance.

Shahram Saki claimed all four Iranian Records in the 120+ kg weight class, and The All-Time Heaviest Asian Squat & Total. His 440 kg (970 lbs) is now also the Sixth-Heaviest Squat in the history of powerlifting. Furthermore, all the lifts are Shahram’s new competition PRs.

*The previous heaviest squat in Asia was 426 kg (939.2 lbs), as Ray Williams set it at the 2015 AsianPF Asia-Oceania Raw Championships.

Shahram Saki only shared his historic 440 kg (970 lbs) squat on Instagram, so the footage of his bench and deadlift are not available yet.

Heading to the 2022 IranBBF National Classic Powerlifting & Bench Press Championships, Shahram Saki has been posting some incredible lifts, and even claimed a raw 502.5 kg (1107.8 lbs) squat in training on April 7th. Saki was not capable of repeating that in competition, but he proved that he is capable of reaching this amazing feat of strength.

Shahram Saki is in his early thirties, but has only taken part in three sanctioned competitions. His first powerlifting meet was back in 2017. The last time Shahram Saki stood on the platform was at the 2021 IranBBF International Club Classic Powerlifting Championships. His performance in that competition is the best proof of his incredible progression.

So in just over 8 months of training, Shahram Saki has lifted 45 kg (99 lbs) more than his previous Total PR. And if he continues making improvements of this proportion, Saki will become a World Record challenger in no time.

In 2022, Shahram came with vengeance and made huge improvements in his third sanctioned competition. Saki won all three of his contests.

Shahram Saki’s performance at the 2022 IranBBF National Classic Powerlifting & Bench Press Championships proves that he is a world-class athlete. If Saki keeps training the way he is now, it also looks like he could become the greatest squatter of all time.