Jezza Uepa is an icon in powerlifting and he has just posted another world-class squat. 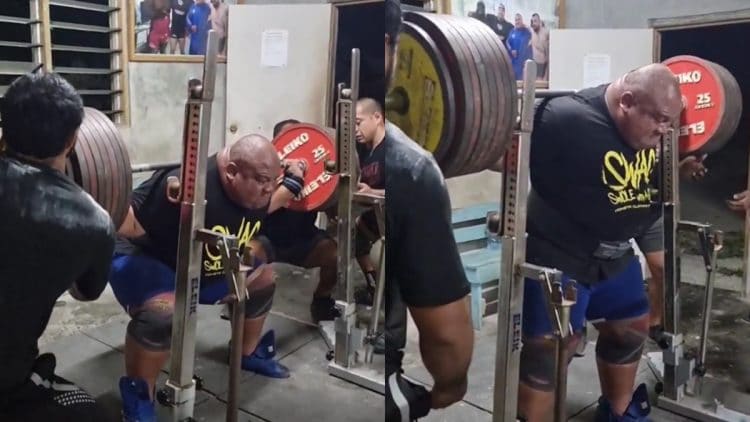 Powerlifter Jezza Uepa, who claimed multiple historic squat milestones, is back in the gym lifting some extremely heavy weight. Jezza is known as one of the most legendary powerlifters in history because of his squat prowess, but his last time competing was in 2019. However, judging by his latest post, it seems like Jezza could potentially be preparing for a sensational comeback. On April 13th, Jezza posted a massive 400 kg (881.8 lbs) squat double on his Instagram.

Jezza Uepa utilized a lifting belt, knee sleeves, and wrist wraps to complete this lift. So the squat is considered as raw by powerlifting standards. Jezza has stepped into his early forties, so he would currently be competing in the Masters 1 (40-44 years) age division. Mohammed Shamsalden Ali set the Official Squat World Record in that division by lifting 375 kg (826.7 lbs). This means that Jezza could absolutely destroy that record if he plans to take part in a sanctioned powerlifting competition.

Coming from the Island Nauru, Jezza Uepa has earned the right to be proclaimed as one of the greatest powerlifters that have ever competed. His extremely impressive resume is also a testimony of this. Jezza’s first powerlifting competition came in 2008, and he accumulated 32 sanctioned contests throughout his career. Jezza came out victorious in 25 of those competitions, which include some of the most prestigious ones.

Jezza Uepa’s recent stellar performance is a sign that he’s gradually building strength and progression. He hasn’t announced anything yet if he intends to compete in a powerlifting competition, but his comeback could impress everyone.

One Rep Max Back Squat Calculator

Squats are the crowned king of exercises. Whether you are a bodybuilder, powerlifter, strongman, gym bro, or booty girl, the...