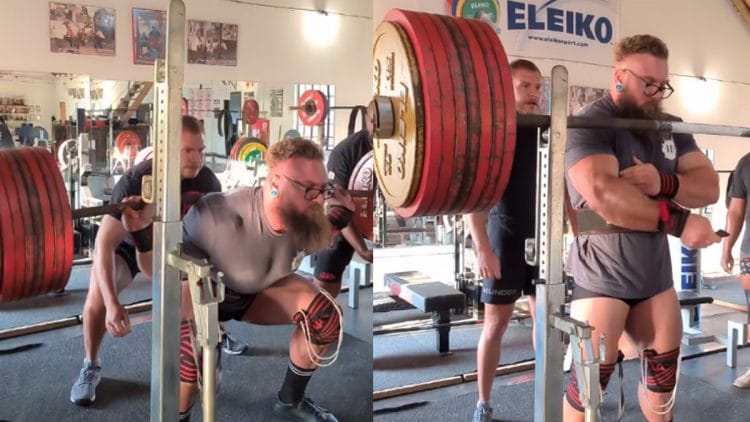 Nicolaas du Preez is relatively new to the sport of powerlifting, but he got a lot of attention due to his earth-shattering lifts. Recently, Nicolaas posted an incredible 410 kg (903 lbs) squat on his Instagram, which he lifted with mind-boggling speed. In addition, just 3 days before this squat, Nicolaas lifted a 400 kg (881.1 lbs) raw deadlift. Nicolaas is 7 weeks out from his next competition, and it seems like he will put up some unbelievable numbers on the platform.

Nicolaas’ 410 kg (903 lbs) squat was not completely raw, as he used knee wraps, wrist wraps, and a lifting belt. His walkout with the bar was extremely shaky, and it seemed like it was too heavy for him. However, once Preez set up his stance, he got very comfortable. Despite the squat being only 10 kg (22 lbs) lighter than his competition PR, Nicolaas made it look effortless.

Nicolaas du Preez’s bodyweight at the time of this lift was 124.4 kg (274.3 lbs). This means that he squatted 3.3x his bodyweight. Nicolaas is also in preparation for the 2022 RPC Elite Raw powerlifting competition. It will take place on May 14th, in Pretoria, South Africa.

Nicolaas also recently transitioned to a Strongman competition for the day, and those results won’t count in powerlifting. Preez competed in the 2022 SA Log, Deadlift & Axle competition. The competition took place on March 19th, in Sunninghill, South Africa. Preez only participated in the deadlift event and ended up pulling 400 kg (881.8 lbs) completely raw, having only used a lifting belt. This is 15 kg (33 lbs) heavier than his competition PR, but once again, he lifted it with ease. Preez deadlifts with a conventional stance and a mixed grip.

“Retired from powerlifting for the day and joined strongmen on their playgrounds.”

You can watch the deadlift here:

Nicolaas du Preez is an excellent powerlifter all around and does not underperform at any event. At 27-years-old, he has taken part in only 6 sanctioned competitions and came out victorious in all of them. As Preez only started competing in 2018, it is incredible to see how much progress he has made already. If he continues like this, there is no doubt that some records will fall under his name. Preez competes in the 125 kg weight class.

Nicolaas du Preez has the potential to become one of the greatest powerlifters in the world. He is making insane progress every week, and we could soon expect him to post a new squat PR from training. Judging by his recent l