The 10 Strongest Women To Ever Walk The Earth

Breaking Down The Strongest Women Of All Time 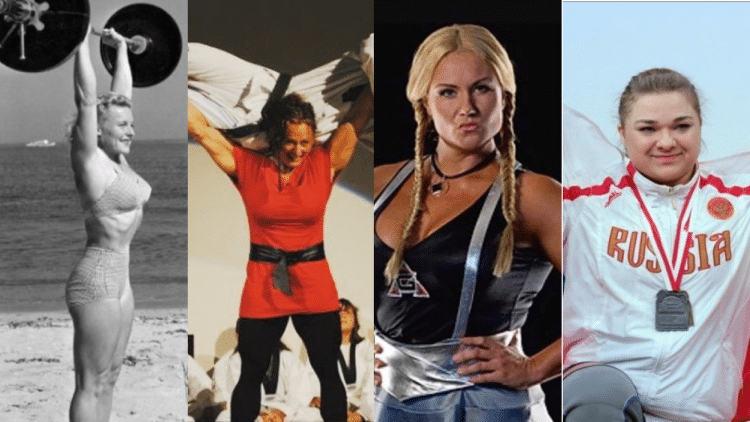 The world of fitness sports is mostly known for the men it attracts. For many years, things have been dominated by men, who have gained far more popularity than the women doing similar things. However, here at FitnessVolt.com, we like to show some respect to those awesome ladies who are just as impressive.

Today we take a look at the top ten strongest females across history. These women have proven in various ways that they deserve just as much credit as men. Not only that, but they have shown that anything is possible, regardless of your gender.

Some of The Strongest Women of All Time

Strongest Women of All Time: Hide

Bev Francis is an Australian powerlifter and bodybuilder, who achieved acclaim in the 1980’s. Initially, she began her career in athletics as a shot putter, breaking records as part of the Australian track and field team. She began powerlifting in 1980, becoming the first woman to deadlift over 300lb. From 1980-1985, she absolutely dominated powerlifting competitions.

In 1983, Francis began to compete in bodybuilding, but struggled at first due to being “too muscular.” However, she worked harder to make her Ms. Olympia debut, in 1986. Following that, she spent the next three years getting third place in the same competition. After her sports career concluded, she opened a quite popular gym, to help others achieve success as well.

Abbey Stockton made a name for herself in the 1930s and ’40s, making her one of the biggest pioneers in female powerlifting. She found success in touring with her husband, and a friend, around the Los Angles area.

The main part of her routine that earned her notoriety, involved the 5’5, 115lb lady to lift her husband over her head and balance him in a handstand fashion.

The unbelievable feats of Abbey Stockton earned her the nickname “The Queen of Muscle Beach.” Moreover, her skills earned her much acclaim, with publications like ‘Strength and Health’ giving her a monthly column. Here, she gave advice to fellow women looking to accomplish similar things to her. She really paved the way for female strength athletes for generations to come.

Aneta Florczyk is a Polish powerlifter who began her career at the age of 16. She has won several championships, most notably being World’s Strongest Woman in 2003, 2005, 2006, and 2008. This is an accomplishment that she has done more than anybody else.

Additionally, she won the title of Europe’s Strongest Woman in 2004.

In addition to all of her championships and achievements, she holds some world records. One such record is in the Guinness Book of World Records.

She managed to lift more adult men over her head in two minutes than anybody else. The number of men she lifted was an astonishing 12!

Finnish powerlifter Heini Koivuniemi was born in 1973. She earned a name in the early 2000s, competing at the World’s Strongest Woman competitions.

While she never won, she did earn an impressive second place in 2001, as well as third place in the following two years.

However, Koivuniemi is not only known for her competitive history. She landed in the Guiness World Record books for throwing a beer keg higher than anyone else.

This was a result of her tossing a 27lb keg over a bar that was put eleven feet, four inches into the air. Talk about tossing back a beer.

Jill Mills got into powerlifting at the age of 23, in 1995. Following that, in 1997, she began strongwoman contests as well. Immediately from the start, she has found success in both sports. Her most notable accomplishments are winning 2001, and 2002 World’s Strongest Woman titles.

Additionally, in 2005, she came in third in the same competition.

What may be the most impressive part of Mills’ career, is the consistency with which she found success. From her start, until her retirement in 2004, she continuously won almost every single event she appeared in.

Moreover, she also managed to have a role for one episode, in the TV series Friday Night Lights. She was a true pioneer among female strength athletes.

Perhaps best known for her role as Hellga on American Gladiator, Robin Coleman is quite diverse. She has experience both with figure bodybuilding, and strongwoman competitions.

Most notably, she earned third place in the 2001 World’s Strongest Woman competition.

What may be the most incredible aspect of Coleman’s career in strength sports was another achievement earned in 2001. She was tasked with doing as many deadlifts as she could, with a car.

She absolutely annihilated her competition, by doing 15 reps, nearly doubling the person who earned second. That is one strong lady!

Surprisingly, the only reason Jan Todd got into powerlifting in the first place, was because of her husband. She married the United States’ first powerlifting champion Dr. Terry Todd. As a result, she began to lift as well, and immediately found success. She was able to do well enough that Sport’s Illustrated even named her the strongest lady in the world at one point.

Russian weightlifter Tatiana Kashirina is something of a phenom in today’s day and age. At just 21 years old, she competed in the 2012 London Olympics. Not only did she compete, but she won gold, setting two world records in the process.

In addition to the Olympics, Kashirina has had success throughout various weightlifting competitions. She has completely dominated any competition in Europe, winning all eight of the competitions she has taken part in.

Also, she has five World Weightlifting Championships in her resume as well. At just 28 years old, it seems likely that she will continue to improve.

Hailing from Taiwan, Chen Wei Ling has set herself apart from her contemporaries as one of the best weightlifters in the world. She won gold in the 2008 Bejing Olympics, as well as in the 2009 World Games. In addition to that, she holds all-time world records for both the 44kg and 47kg weight classes.

What makes Chen Wei Ling so impressive, is her ability to lift much heavier than her bodyweight. She somehow manages to lift more than three times her weight, deadlifting 430lb, and squatting 457lb. As far as a woman is concerned, she absolutely demolishes all expectations.

Becca “Strongest Ever” Swanson is quite a physical specimen. An American strongwoman, she is the only lady to date to ever squat over 800lbs. Moreover, according to her Instagram, her best lifts are an 854lb squat, 600lb bench, 694lb deadlift, and 2050lb total. That total lift makes her the only woman to ever lift over 2000lb.

Swanson started competing in 2002, immediately making an impression. Subsequently, in 2006, she lifted over 4 times her body weight of 197lb by squatting 804.7lb. Calling her the “Strongest Ever” seems like a fair assessment of her ability.

These women are just some of the more powerful throughout history. There are still a plethora of athletes that were not included in this list, which further demonstrates how far women’s strength sports have come.

It is crazy to take a look back through history and realize how some of these women paved the way for others. The way ladies keep breaking barriers in strength sports is incredible.