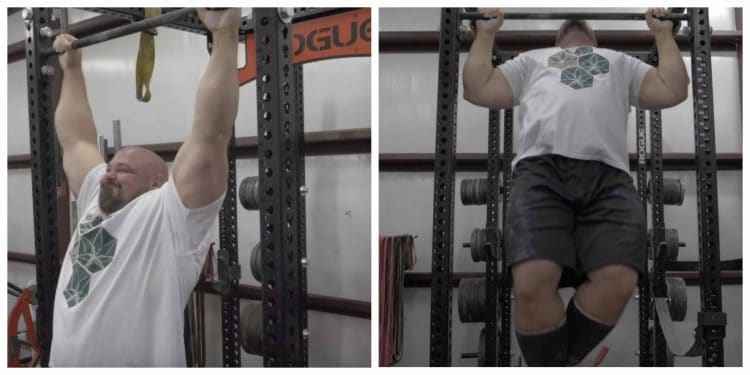 Four times World’s Strongest Man title winner and the unofficial holder of “the nicest guy on the planet that could probably crush your head like a watermelon” title, Brian Shaw challenged his buddy and former Navy SEAL, Sean Rosario, to a series of strength events in his awesome home gym.

The events in question were: 1. A grip strength medley with increasingly heavier and awkward objects. To even out the playing field, Brian doubled the weight of the grip implements.  2. 500m on a rowing machine  3. Max rep pull-ups and an awkwardly homoerotic cold water hot tub chill and talk.

The first event, Sean Nearly won because the “blob” slipped out of Brian’s hand but in the end, Sean Rosario couldn’t pick up the slam ball without dropping it out of his grip. 1-0 for the bald gentle giant. The second event, 500m row went to Brian, because believe it or not, he’s quite good at it. He actually beat the world record for the 100m row back in 2016 just for the lulz when he had a similar one on one with a CrossFit champ, Ben Smith.

Ok, maybe “good” isn’t the right word for Brian’s approach, because he just pretty much brute forces his way through the rowing machine. His size, accompanied by his strength means the rowing machine basically gives him zero resistance. This time the distance a bit longer, 500m, but Brian being Brian, demolished the former Navy SEAL on the rower.  Sean Rosario tried his best and did 1,33 min, which unfortunately wasn’t enough to beat Brian’s 1,14 min…which is just 4-seconds short of a world record in his age group.

This brings ups to the pull-ups, which Brian has been teasing for nearly a year now. He’s promised and promised he would do pull-ups but the day never came-until today. Believe it or not, Brian can actually perform a pull-up, six of them to be exact. Brian’s pull-ups looked exactly how you would imagine a 440lbs man would do a pull-up. Each rep was a full force effort to get the head above the bar, with a little help of the leg drive. Sean Rosario, managed to bang out 20 reps, even though they were not full range of motion reps. I, personally find comfort in knowing that there actually exists a single physical fitness event in which I could best Brian Shaw.

The kinda-sorta awkwardly looking cold bath is actually a regular recovery therapy which is even used by pro fighters from time to time. Supposedly it helps with injuries and muscle recovery, it also helps in sharpening your mind because freezing your balls off isn’t a fun experience for the body.