Powerlifter Tamara Walcott appeared on Ellen, where she discussed her start in the sport, did some deadlifts, and was given some cash 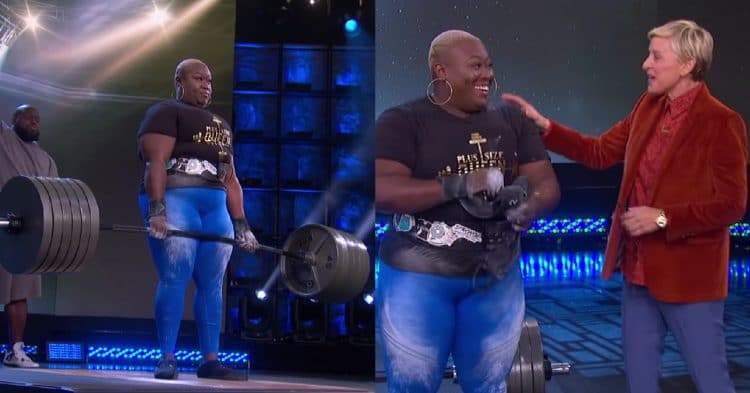 In recent times powerlifting has been getting a much bigger spotlight in the world. This was perhaps no more evident than by the fact that world record holder Tamara Walcott appeared on Ellen, where she even performed some deadlifts.

Having been competing since 2018, Walcott wasted no time finding success in the sport of powerlifting. This was taken to a whole new level recently too, when she was sent hitting a massive 636lb deadlift all-time world record earlier this year, at the 2021 WRPF Showdown.

However crazy it may sound though, this might possibly be the second biggest moment of the year for her, as she posted to her Instagram to reveal that she made an appearance on the talk show Ellen. Here she discussed how she got into the sport of powerlifting and how she maintained her busy life and training schedule while being a single mom, before doing a series of huge deadlifts for all to see.

“I hope the world understand POWERLIFTIng a bit more after this!” Walcott wrote in her caption.

“MY FELLOW LIFTER MY SISTERS AND BROTHERS OF POWERLIFTER I HOPE I GAVE YALL ⚪️⚪️⚪️ it was 585lbs when I added that next plate … cause 495lbs MOVED STUPID! THE IMPOSSIBLE IS POSSIBLE … I met ELLEN AND ALL I HAD TO DO WAS BE ME DOING WHAT I LOVE!!! POWERLIFTING … saved my LIFE! Can’t wait to share my entire story with the world .. there is so much layers to me !”

In addition to the deadlift that she pulled off, Tamara Walcott also was given $15,000 by Ellen, courtesy of T-Rex Tape. This was something that was clearly important to her, as you could tell by the look on her face that this was going to help her tremendously.

Before doing this deadlift, she talked a bit about getting started in powerlifting. She said that she began the sport to lose weight after a divorce, quickly fell in love with it, and has not looked back ever since, even if it means keeping a busy schedule while working her day job, and doing all her training at night.

“I think powerlifting kind of found me. I was going through a divorce, ended up weighing like 450lb at that point, I’d gained so much weight. I poured everything into my kids, I poured into my marriage and kind of forgot about myself,” Walcott said.

“So I ended up going through a divorce unfortunately, and I had to move and I started working out. I went to a powerlifting gym, fell in love, and just never left… I lost over 100lb the first year and I just fell in love.”

The story of Tamara Walcott is an inspiring one of weight loss and family, combined with pure strength and incredible talent. It was awesome to see her given a platform on Ellen, and this was undoubtedly good for the sport.