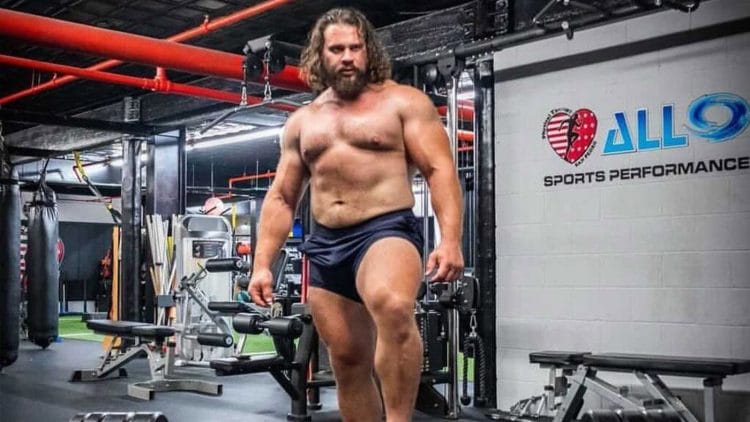 Immediately after winning the inaugural strongman contest at the 2021 Rogue Invitational, Martins Licis set the world record in Thor’s Hammer at Rogue Record Breaker event. Licis lifted the 136kg (300lbs) hammer off the ground and locked it in the standing position. In addition to the $133,685 prize for winning the strongman contest, Licis walked away with an extra $5,000 for the record-breaking lift.

The record-breaker event was a part of the 2021 Rogue Invitational that took place from Oc. 29th to Oct. 31st in Round Rock, Texas. After passing through the online qualifying stage, athletes attempted to break eight world records in six record-breaker events. However, only Thor’s Hammer record was broken. Strongwoman Nadia Stowers came close to breaking the record as she matched Hanna Linzay’s bag over bar world record at the event. Stowers successfully tossed a 40lbs bag over a 15ft bar.

The list of competitors in order of lifting is as follows:

Thor’s Hammer is an event that tests the arm lifting grip of an athlete. Competing athletes lift a large hammer and attempt a static hold of the hammer. The hammer is returned to the ground after the judge gives the down command. Athletes can choose the hand they want to use to lift the hammer and they are allowed to change hands for every attempt if they wish to. Arm-lifting and strongman legend Odd Haugen served as the judge for this event and every athlete had one minute to complete the lift.

The previous record for Thor’s Hammer belonged to multiple-time WSM winner Hafthor Bjornsson with a 118kg (260lbs) lift. The hammer weights for the Rogue Record Breakers event were as follows:

All six men lifted the first hammer weighing 90.7kg (200lbs). Trey Mitchell’s challenge came to an end as he failed to lift the next hammer that weighed102kg (225lbs). All five of the remaining competitors successfully completed the 113.3kg (250lbs) lift. However, Laurence Shahlaei switched to his left hand from the right to be successful in his attempt.

The fourth hammer weighing 125kg (275lbs) was the first one above the existing world record limit. Mikhail Shivlyakov and Mateusz Kieliszkowski were the first ones to break Hafthor Bjornsson’s record. However, Kieliszkowski failed in his first attempt and was able to complete the lift after changing the hand. Martins Licis was the only other strongman who completed the 125kg lift as both Laurence Shahlaei and Josh Thigpen both failed to lift the hammer.

Mikhail Shivlyakov and Mateusz Kieliszkowski could not succeed in lifting the next hammer that weighed 136kg (300lbs), which put an end to their hopes of breaking the record at this event. Martins Licis went next and failed at the first attempt with his right hand. However, just like he did in the Invitational, Licis switched the hand and successfully completed the lift with his left hand. The inaugural strongman competition winner also attempted to lift a 147.3kg (325lbs) hammer off the ground but failed at it. Nonetheless, Martins Licis went home with a WSM title, a world record to his name, and a pocket full of cash.